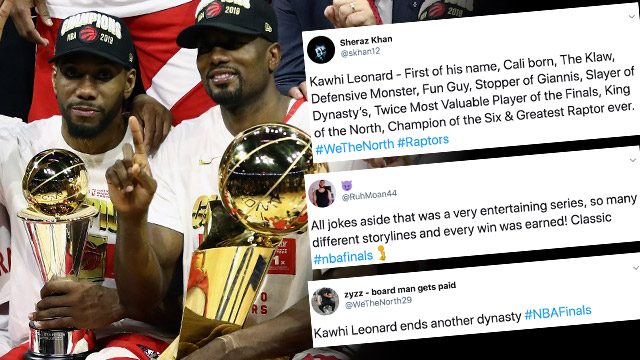 MANILA, Philippines – From kings in the north to new kings of basketball, history has been made.

HISTORY HAS BEEN MADE.

The TORONTO RAPTORS are your 2019 NBA CHAMPIONS! This is the Raptors' first title in franchise history! #WeTheNorth #NBAFinals

Basketball fans and spectators were quick to dominate the Twitter trending topics both in the Philippines and worldwide.

King in the North

Aside from Raptors’ historic title, social media users also took to Twitter to congratulate Kawhi Leonard for winning the NBA Finals Most Valuable Player award. Leonard averaged 28.5 points and 9.8 rebounds in the series.

KING IN THE NORTH.

Here are more tweets about the championship: