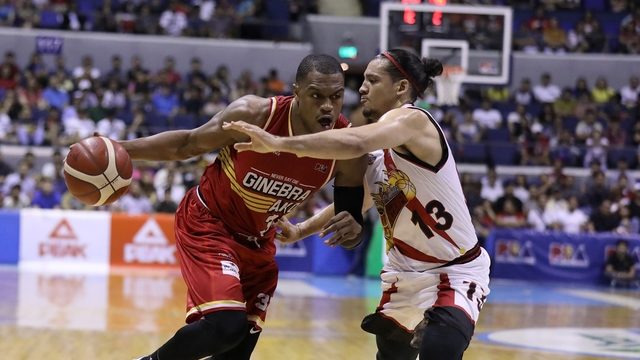 MANILA, Philippines – Barangay Ginebra regained its winning ways in pulsating fashion with a 110-107 overtime win over San Miguel in the 2019 PBA Commissioner’s Cup at the Araneta Coliseum on Sunday, June 16.

Justin Brownlee played all 53 minutes and delivered 39 points, 15 rebounds, 5 assists, and 2 blocks, and played a key role in the extra period as the Gin Kings evened their record at 3-3 following back-to-back losses.

The Beermen had plenty of chances to win the game, but could not find the bottom of the net in the final minute with Chris Ross muffing a three-point attempt and Alex Cabagnot missing a last-gasp floater.

Also making his presence felt in the win was Mercado, who put up 12 points, 5 rebounds, and 5 assists, and Japeth Aguilar, who had 9 points.

Charles Rhodes frolicked in the paint for San Miguel with 34 points, 12 rebounds, and 3 blocks, but it did not help their cause when he picked up his final foul with 2:45 minutes left in overtime.

After Rhodes fouled out, Brownlee converted an and-one play for a 107-102 lead and the Gin Kings never relinquished their hold of the upper hand despite some miscues in the endgame.

Back-to-back Brownlee and Mercado turnovers in the last 40 seconds left the comeback door ajar for the Beermen, who were down 107-109, but they failed to capitalize.

Cabagnot chalked up 21 points, Ross had a triple-double of 11 points, 13 rebounds, 11 assists, and 3 steals, while June Mar Fajardo added 13 points, 19 rebounds, and 2 blocks in the losing effort.