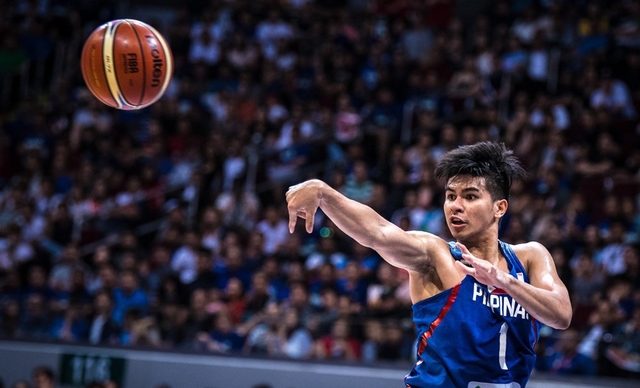 Facebook Twitter Copy URL
Copied
Kiefer Ravena, whose suspension from FIBA ends in August, can make it just in time for the global hoops showdown

Yeng Guiao revealed they are mulling over including Ravena in Gilas Pilipinas’ pool of players with the status of Jayson Castro playing in the quadrennial showpiece hanging in the balance.

Castro, according to Guiao, is uncertain to suit up for the national team due to “personal priorities” – leaving the point guard position up for grabs. (READ: Jayson Castro could miss Gilas campaign in FIBA World Cup)

As faith would have it, Ravena – who has been suspended by FIBA for 18 months after testing positive for banned substances – will already be allowed to practice with his PBA team NLEX starting June 24.

Also, his suspension ends on August 24, just in time before the World Cup kicks off in China on August 31.

“[H]e’s one of the guys that we’re looking at to take up the place of Jayson,” Guiao said of Ravena as the national team began its buildup for the global hoops showdown on Monday, June 17.

Although admitting Castro missing the World Cup would deal a huge blow to the Philippine squad, Guiao said the younger players can fill his shoes.

“For me, we have a deep talent pool. And it’s also the time for the next generation to be given the chance,” he said in a mix of Filipino and English.

If the plan pushes through, Ravena is expected to have a seamless return to Gilas considering Guiao is also his coach for the Road Warriors.

They worked together for one and a half conferences – leading NLEX to its first PBA semifinals apperance in franchise history – before it was revealed in May 2018 that Ravena was suspended by FIBA. – Rappler.com