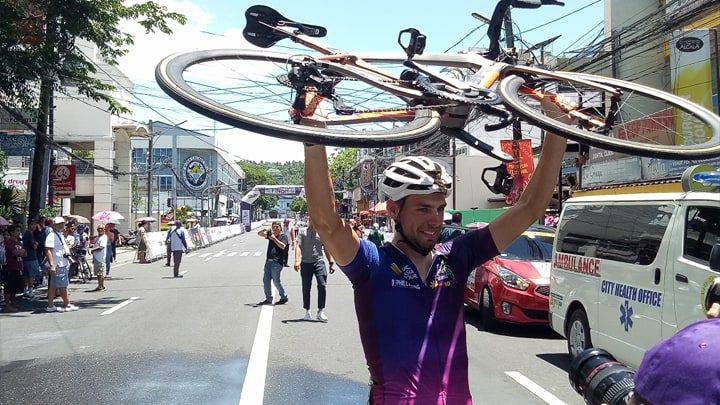 Closing the five-stage event with a total time of 20 hours, 38 minutes and 7 seconds, the 26-year-old semi-pro won his 2nd Union Cycliste International (UCI) title – his first since the France Kreiz Breizh Elites in 2016.

“It was great. It was really hot. Took control for 4 days and we lost two guys very soon, so I only had two teammates, but they did a great job riding 4 days in the front,” he said in the post-race scrum.

“We never lost control of the race, so it was really good.”

German rider Mario Vogt gave everything he had in the last day and easily won the final leg with a time of 3:33:39, but only finished 12th in the final general classification (GC) standings. Nevertheless, he brought home $1,090 (P56,680) for his stage win while Meijers banked in $2,725 (P141,700) for winning the overall title.

It was a mad scramble from the get-go as 8 cyclists jockeyed for position in the lead group as early as 30 kilometers in.

As Meijers hung back with the peloton for the entirety of the 138.1-km leg, the lead group pulled away as far as 3 minutes from the pack, all of them trying to shave off precious seconds from their own GC time.

However, even with Vogt’s mad dash to the finish line, the lead group’s efforts were all for naught as Meijers never relinquished his purple jersey en route to the Le Tour title.

Stage 5 was a shorter lap across the towns of Pilar and Donsol before circling back for a third-straight finish at Legazpi City Hall. It featured a 2.2-km King of the Mountain tretch at Highlands Legazpi, which was won by Ismael Grospe, Jr. of Go for Gold Philippines.