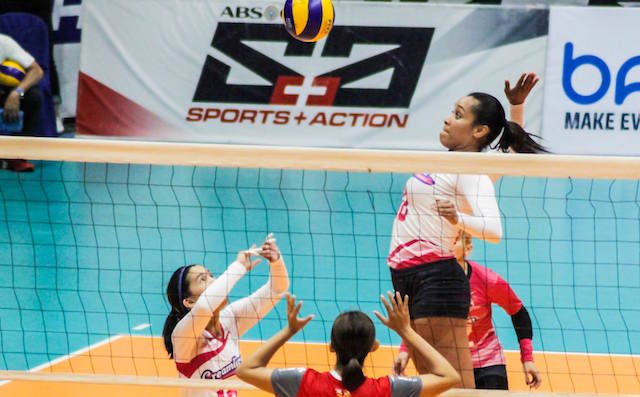 MANILA, Philippines – The Creamline Cool Smashers booked a semifinal slot after cruising to a straight-set win over Motolite, 25-15, 25-20, 25-23, in the 2019 Premier Volleyball League (PVL) Reinforced Conference on Wednesday, June 19, at the Filoil Flying V Centre in San Juan.

After dropping their opening game against PetroGazz, Creamline strung up 6 straight wins to claim solo 2nd as the Cool Smashers also spoiled the return of Myla Pablo.

With the presence of Pablo – who debuted with 3 points – the young Motolite team managed to keep up with the defending champions, but Creamline took control down the stretch of the first two sets.

Motolite built on a 4-0 start in the 3rd set to lead 8-3 by the first technical timeout.

The Creamline imports, however, led the team rally to knot the score at 14-all before pulling away late in the final frame to seal the win.

The Power Builders slipped to a 2-5 record in the standings.

Olena Lymareva-Flink’s 15 points catapulted the Lady Troopers to a 4-3 slate in the standings.

After losing the first two sets, Balipure had an early spark that pushed them to 18-14 lead in the 3rd set. The Lady Troopers rallied back to tie the score at 19-all and eventually pulled away to seal the win.

Danijela Dzakovic and Alexandra Vajdova combined for 27 points, but it was not enough to give Balipure a chance to nail its first win. – Rappler.com