Jun 22, 2019 12:52 PM PHT
Agence France-Presse
Facebook Twitter Copy URL
Copied
Manny Pacquiao says the ever-present throng energizes him, but those closest to him have mixed feelings about the cast of extras milling around 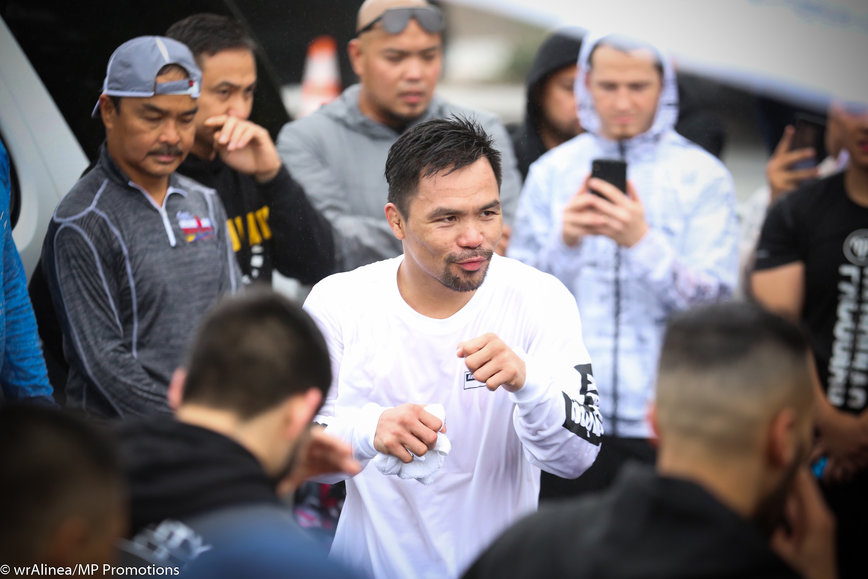 LOS ANGELES, USA – After a boxing career that has spanned nearly a quarter of a century and 70 professional contests, it is little surprise that Manny Pacquiao has his training regime honed to perfection.

On July 20, the 40-year-old Filipino icon will climb into the ring for the 71st time when he faces Keith Thurman at Las Vegas’ MGM Grand, aiming to capture the undefeated American’s World Boxing Association super world welterweight crown.

To prepare himself for a contest that the younger, hard-hitting Thurman has vowed to ensure will be Pacquiao’s last, the veteran superstar will rely on a formula that has served him so well over the years.

Pacquiao wakes at around dawn each day in the multi-million-dollar mansion that has been his Los Angeles base for the past decade.

If sparring is scheduled for later in the day, Pacquiao will embark on a light morning workout, jogging to a park two miles from his home where he runs laps, shadow boxes and performs core work.

On non-sparring days, he heads to Griffith Park, for a longer, more grueling run in the hills which frame the sprawling Californian metropolis.

Accompanying him are around two dozen training partners, security, friends and fans, a feature of Pacquiao’s rise to the pinnacle of his sport.

At a recent morning workout, a crowd of around 100 people, many from Los Angeles’ large Filipino community, gather to watch as the eight-division world champion grimaces his way through a series of sit-ups and crunches, occasionally pausing to check his phone.

When it is over, Pacquiao heads back to a home that is soon a hive of activity. To the casual observer the household has a vague air of organized chaos.

At most hours of the day in his luxurious 4,200 square foot, five-bedroom residence – decorated with portraits of his family and large framed photographs of his signature victories – dozens of loosely affiliated members of “Team Pacquiao” are milling around.

The unrelenting hum would be anathema for more reclusive fighters, who prefer to conduct their training camps in seclusion, away from prying eyes.

‘I want people around’

Pacquiao, though, says simply that he is a people person. The ever-present throng energizes him.

“I want to have people around so that I’m motivated,” he tells AFP after a breakfast of white rice, broth and grilled meat prepared by his Filipino chefs.

“My feeling is that I don’t want anybody to see me being lazy. I want to impress them every day. I love it, as long as it’s not distracting me or affecting my training.”

Some of his closest confidantes, however, have mixed feelings about the cast of extras who have hitched their wagons to Pacquiao’s star.

“A lot of it is support, a lot of it is they want to be on TV or something,” says trainer Freddie Roach. “But it works for him. He knows how to get in shape and he does it very, very well.”

Roach, however, admits to worrying that bankrolling the entourage may ultimately drain Pacquiao’s fortune, estimated at around $200 million.

“I bet Manny doesn’t even know the names of at least 50% of the people in his house right now as we speak,” Roach told AFP in an interview.

“Manny’s a nice guy. He likes to help people. I always say that’s why he might be broke when he’s through. Because he gives it all away. He’s just too generous.”

That generosity knows few boundaries, whether it is buying land and building homes for more than 1,000 poverty-stricken families in the Philippines, or paying to fly his entourage around the world on chartered commercial jetliners.

For now, though, the money keeps rolling in.

Pacquiao will reportedly receive $20 million for the Thurman fight, and banked $10 million from his January defeat of Adrien Broner, paydays that will keep the free-spending show firmly on the road.

But how much longer Pacquiao (61-7-2, 39 knockouts) is willing to put his body on the line to generate those kinds of numbers is anyone’s guess.

‘Boxing is my passion’

His retirement in 2016 proved short-lived, Pacquiao returning to the ring 7 months later.

“Boxing is my passion,” Pacquiao tells AFP. “It’s really hard to stop and hang up the gloves when you know that you can still fight.

“My mind is very active, 100% focused and wants to continue my career. But sometimes I have to listen to my body.”

Roach believes Pacquiao, a member of the Philippines Senate, intends to extend his career until 2022 to coincide with a run for the presidency of his homeland, something the boxer has repeatedly played down.

“He wants to be the first person to be president and world champion at the same time,” Roach says.

“I think he’ll keep going long enough to try and make that happen.

Yet the potential threats to Pacquiao’s longevity in a welterweight scene brimming with fearsomely accomplished, and younger, practitioners are obvious.

As well as the 30-year-old Thurman (29-0, 22 knockouts), the unbeaten Terence Crawford looms across the division.

Veteran promoter Bob Arum recently voiced concern that Pacquiao risked serious injury by fighting into his 40s. Pacquiao, who no longer works with Arum, says the fears for his safety are misplaced. (READ: Arum fears brain damage for veteran Pacquiao)

“He cares about me, I understand what he’s saying,” Pacquiao said of Arum’s remarks. “But I’m not the only one who has fought at this age. George Foreman, other boxers who fought when they’re 47 years old or 50 years old. I’m not saying that at age 47 or 50 I’m going to still be fighting. No. But it depends how you discipline yourself, how you work hard.”

Working hard has never been a problem for Pacquiao. Strength and conditioning coach Justin Fortune says Pacquiao needs to be reined in. “He’s a gym rat,” Fortune says. “He never gains weight. His metabolism must be off the charts.”

Roach, meanwhile, hopes that Pacquiao will stick to an agreement the two men made several years ago, namely that when the 59-year-old cornerman believes it is time for him to retire, he will heed the advice and hang up his gloves.

“I think that agreement might have been made too long ago,” Roach says. “Because I think that even if I do say ‘Manny it’s time to quit, you’ve lost a step, you’re not the old Manny Pacquiao,’ there’s too many people around him who will tell him that I’m full of shit, and he may listen to them.

“At one time I’d have said our agreement was pretty solid and he’d listen to me. But today I’m not so sure.”

For the time being, however, there is no sign of Pacquiao’s speed or punching power being on the wane, according to Roach.

After arriving in Los Angeles last week following the first half of his training camp in the Philippines, Pacquiao has looked impressively sharp.

The devoutly religious Pacquiao is said to be incensed by Thurman’s vow to “crucify” him in the ring, remarks that Roach says have got Pacquiao “a bit upset.”

“So that helps,” Roach said. “He wants to win this one a little bit more than usual.” – Rappler.com