Ashleigh Barty: From quitting tennis to world No. 1

Jun 24, 2019 1:45 PM PHT
Agence France-Presse
Facebook Twitter Copy URL
Copied
Following a brief stint as a professional cricketer, the Australian works her way back to tennis form and rises to the summit of the rankings 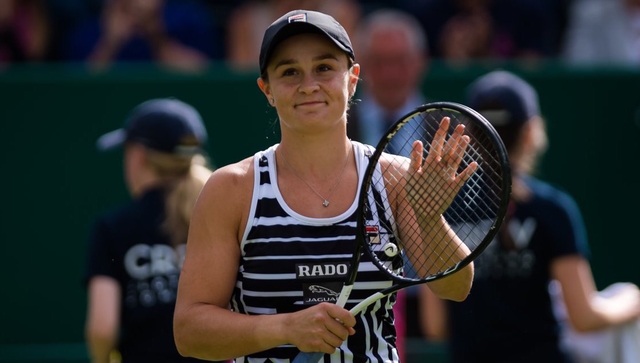 PARIS, France – Newly-crowned world No. 1 Ashleigh Barty could never have imagined winning a Grand Slam title and rising to the summit of the rankings when she took a break from professional tennis in 2014.

But the 23-year-old Queenslander has gone from strength to strength since returning at Eastbourne 3 years ago following a brief stint as a professional cricketer.

She became Australia’s first women’s world No. 1 since Evonne Goolagong-Cawley in 1976 by beating her doubles partner Julia Goerges in the final of the WTA event in Birmingham on Sunday, June 23.

Barty broke through with her maiden Grand Slam triumph at the French Open earlier this month, before saying her “next goal” was to usurp Japanese star Naomi Osaka as world No. 1.

She extended her winning streak at 12 matches by seeing off German Goerges 6-3, 7-5, and she now has not lost since a defeat by Kristina Mladenovic on May 16 at the Italian Open in Rome.

Barty, the first player from her country to win Roland Garros since Margaret Court in 1973, featured for the Brisbane Heat cricket team in the Women’s Big Bash League 4 years ago, playing 9 matches with a top score of 39.

“No, not at all,” Barty said after the French Open of her hopes of winning a major title when she started her comeback with a surprising run to the Eastbourne semifinals in 2016.

“I remember at the end of that week, my body was shot. It wasn’t used to playing matches again. It was incredible.”

“To know that it was 3 years ago – it feels like only yesterday that we were there and in the same breath it also feels like it was a lifetime ago.”

Barty lost in 3 Grand Slam doubles finals alongside Casey Dellacqua in 2013, but had only won two singles matches and lost 9 at the big four tournaments when she stepped away 5 years ago.

Barty did not even play another Grand Slam singles main draw tie until 2017, and only reached the second week of a major for the first time at last year’s US Open.

But she does not think she could have seen such a stunning upturn in her fortunes without taking a hiatus.

“Absolutely not. I don’t even know if I’d be sitting here talking to you if I was playing tennis (and) if I didn’t step away,” Barty said.

“It’s obviously a part of my life that I needed to deal with, and I feel like it was the best decision that I made at the time, and it was an even better one coming back.”

Barty’s game is built around a strong serve and an excellent backhand slice, a rarity in the women’s game.

Her unusual style appears perfectly-suited for grass court tennis, with the start of Wimbledon on July 1 looming large.

Barty said the clay court French Open, which she won with a 6-1, 6-3 final thrashing of Czech teenager Marketa Vondrousova, was the last Grand Slam she expected to win, potentially firing a warning to her Wimbledon rivals.

“I think we have only played a couple of times, but I’m sure that we’ll play many more times over both of our careers, and hopefully they’re in big matches.” – Rappler.com