Jun 25, 2019 1:11 PM PHT
Rappler.com
Facebook Twitter Copy URL
Copied
Giannis Antetokounmpo pays tribute to the people who believed in him as he becomes the first Greek player to clinch the coveted award 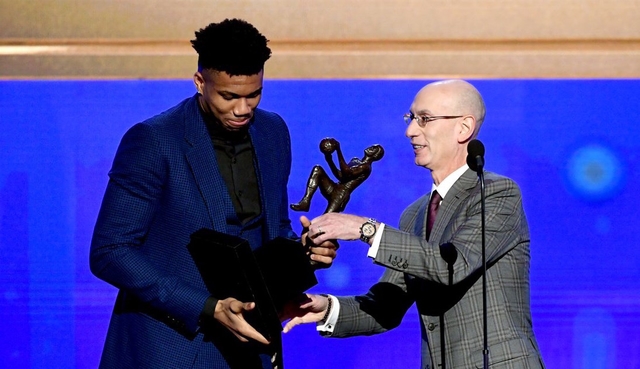 MANILA, Philippines – Giannis Antetokounmpo could not hold back his tears as he accepted his first NBA MVP trophy in the 2019 NBA Awards on Monday, June 24 (Tuesday, June 25, Philippine time).

The Milwaukee Bucks megastar paid tribute to the people who believed in him as he became the first Greek player to win the coveted award, besting Houston Rockets’ James Harden and Oklahoma City Thunder’s Paul George.

“First of all, I want to thank my teammates. It takes more than one person to win 60 games,” said the 24-year-old, who led the Bucks to an NBA-best 60-22 record in the past season.

“I want to thank the coaching staff for teaching us, pushing us every day – every single day believing in us, teaching us what it takes to win,” he added.

A lanky 18-year-old from Greece, Antetokounmpo saw his NBA dream come to fruition after he was nabbed by the Bucks as the 15th overall pick in the 2013 draft.

The 6-foot-11 forward rose to prominence since then, becoming the Most Improved Player 4 years after, earning a slot in the All-NBA Second Team for back-to-back years before winning the highest individual award.

“I want to thank the front office, the ownership for believing in me when I was 18 years old back in Greece. They allowed me to lead this team and trusted me,” he said.

Antetokounmpo got more emotional when he talked about his father, Charles, who died in 2017.

“I want to thank my dad. Obviously, my dad is not here with me. Two years ago, I had a goal in my head that I’m going to be the best player in the league and I’m going to do whatever it takes to help my team win. Every time I stepped on my floor, I always think about my dad and that motivates me and pushes to play harder and move forward,” he said.

Antetokounmpo also mentioned his mother and brothers in his acceptance speech as his tears continued to fall.

“I want to thank my amazing mom. She’s my hero. If you have a good parent, your parent sees the future for you and she always saw the future in us, she always believed in us, she was always there for us,” he added.

With the Bucks falling two games short of reaching the championship round last season, Antetokounmpo vowed he would pull out all the stops to bring an NBA title to Milwaukee.

“As my dad told me, always want more but never be greedy. My goal is to win a championship and I’m going to do whatever it takes to make that happen,” he said. – Rappler.com