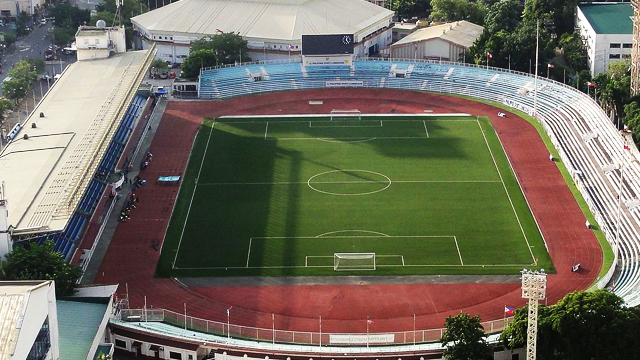 MANILA, Philippines – The Rizal Memorial Sports Complex (RMSC) and Philsports Arena are set to undergo renovation in time for the country’s hosting of the 2019 Southeast Asian (SEA) Games.

Philippine Sports Commission (PSC) chairman William “Butch” Ramirez received P842 million from the Philippine Amusement and Gaming Corporation (PAGCOR) for the rehabilitation of both venues that is set to be completed on October 30, 2019.

According to Ramirez, the construction firms have committed to start on the project by the first week of July.

The Philsports Arena in Pasig will be used for the indoor volleyball games, while the weighlifting and taekwondo events will be held at the Ninoy Aquino Stadium in RMSC.

The pitch and track oval of the Rizal Memorial Stadium – that will host the men’s football games – will be included in the renovation.

According to Philippine Football Federation president Mariano “Nonong” V Araneta, individual seats and a roof over the spectators’ area of the football stadium are some of the expected improvements.

This will be the first time these sports venues will be renovated since their constuction.

The Ninoy Aquino Stadium, built on January 24, 1989, hosted the indoor volleyball tournament of the 1991 SEA Games and the table tennis competition of the 2005 SEA Games.

On the other hand, the Philsports Arena was first opened in 1985 to host majority of the games of the country’s professional basketball league.

In 2006, it was the site of the infamous stampede that killed at least 71 people for the anniversary of the defunct ABS-CBN game show Wowowee. (READ: Charo Santos-Concio on the ‘most painful chapter’ in her career). – Rappler.com