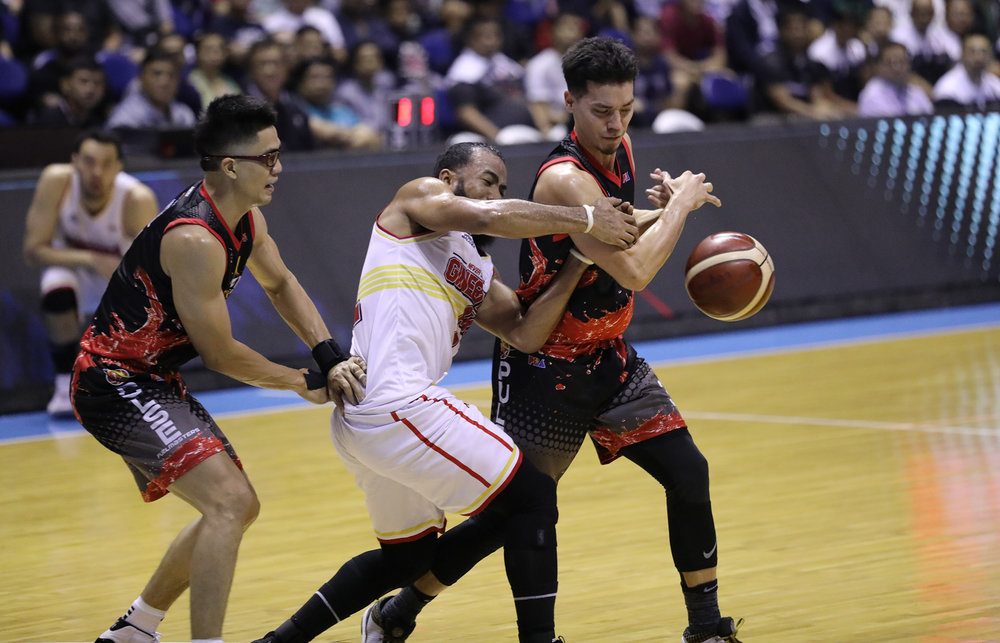 MANILA, Philippines – The Phoenix Pulse Fuel Masters waxed hot when it mattered most and survived the Barangay Ginebra San Miguel, 111-103, in the 2019 PBA Commissioner’s Cup at the Araneta Coliseum on Friday, June 28.

Matthew Wright erupted for 32 points on an efficient 10-of-17 clip with 6 rebounds and 3 steals while import Richard Howell churned out a 31-marker, 21-board double-double on a 15-of-23 shooting.

Down 11 midway through the 3rd quarter, Phoenix blazed ahead to a 78-75 lead off a huge 14-0 run to get them back in the game. All in all, the Fuel Masters tallied a staggering 45 points for the quarter compared to the Gin Kings’ 25.

However, with 8:54 left in regulation, Phoenix head coach Louie Alas got tossed out for complaining on a missed out of bounds call on Stanley Pringle.

After Pringle split his technical free throws, Justin Brownlee then went on a 5-0 tear, ending with a go-ahead, pull-up three at the 8:03 mark that sent the crowd in a heated frenzy.

Brownlee and Wright then traded threes after an 8-2 Phoenix run for the 102-98 Fuel Masters lead. Ginebra came as close as two points with 3:40 to go, but Howell and Wright did well down the stretch to keep Phoenix barely out of arm’s reach.

After a five-second inbound violation on Scottie Thompson, Howell went for the dagger fadeaway two, which clanked off.

However, Jason Perkins was at the right place for the putback layup and pushed Phoenix away for good, 108-102, with 32 ticks left.

After towing Phoenix to the win, Alas deflected all credit to assistant coach Topex Robinson, whom he insisted on calling “associate head coach.”

Likewise, Robinson deflected credit in turn to the players who finished off the game despite Alas’ ejection.

“There were a lot of times where we could have just rolled down and gave the win to Ginebra, but when everything was against us, we just stayed together and played together,” said Robinson in the post-game presser.

Brownlee did the heavy lifting yet again for Ginebra and finished with 31 points, 26 coming in the 2nd half alone, plus 15 rebounds, 7 assists, 6 steals and 3 blocks. LA Tenorio added 20 markers and 5 dimes while Japeth Aguilar chipped in 17 points and 3 blocks in the losing effort.

With the win, Phoenix wound up in a three-way tie with Ginebra and Alaska at 4-4.