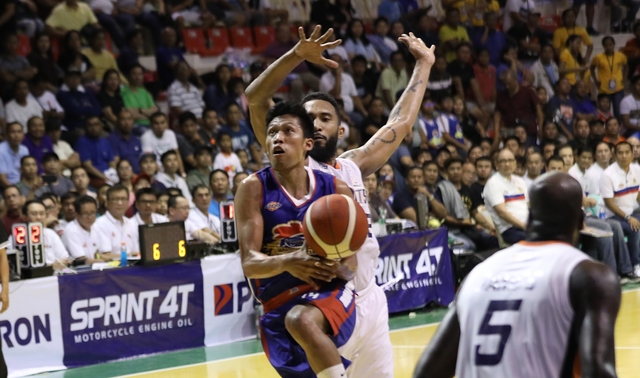 MANILA, Philippines – Mark Barroca impressed before his townsmen as Magnolia ripped Meralco, 99-88, in the 2019 PBA Commissioner’s Cup at the Mayor Vitaliano Agan Coliseum in Zamboanga City on Saturday, June 29.

Barroca fired a team-high 21 points on top of 7 assists to help the Hotshots earn their fifth straight win after dropping their first two games and deal the Bolts their fourth straight defeat.

It was not just Barroca, though, who starred in the victory as import James Farr chalked up 19 points, 17 rebounds, and 3 blocks, while Paul Lee came off the bench and contributed 18 points and 3 rebounds.

Magnolia ended the maiden period with a 17-point lead off a blistering 22-3 run, and from there, never reliquished its hold of the upper hand.

Although Meralco managed to inch within 4 points behind a Chris Newsome three-pointer with less than 5 minutes left in the 3rd quarter, 57-61, it never got any closer after its foes pulled away for good.

Farr scattered 12 of his output in the final frame as the Hotshots enjoyed a lead as large as 21 points, 95-74.

Ian Sangalang delivered 11 points and 10 rebounds, Jio Jalalon added 9 points and 2 steals, while Marc Pingris had 4 points and 8 rebounds in the win.

Delroy James introduced himself in the PBA with 35 points, 10 rebounds, 4 assists, and 3 blocks, but not even his all-around performance could arrest the Bolts’ skid as they dropped to 3-6.

Newsome was the only other Meralco player in double figures with 10 points, 5 rebounds, and 2 steals, while Mike Tolomia – also a Zamboangueño – put up 8 points and 4 assists.