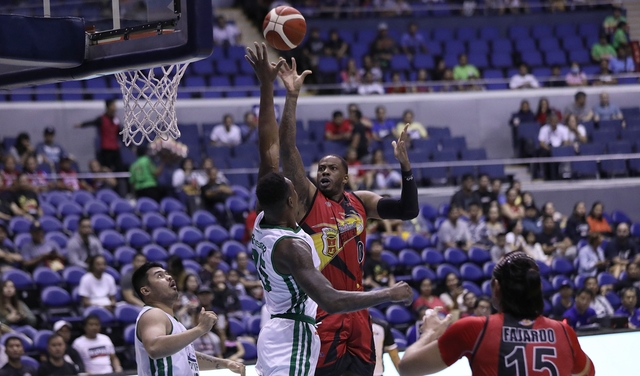 MANILA, Philippines – Columbian proved it’s no pushover as it hacked out a stunning 134-132 overtime victory over San Miguel in the 2019 PBA Commissioner’s Cup at the Araneta Coliseum on Sunday, June 30.

Import Lester Prosper frolicked in the paint but it was locals CJ Perez and Glenn Khobuntin who hit crucial buckets down the stretch as the Dyip earned their second win in 8 games and handed the Beermen their fifth loss in 7 outings.

Khobuntin buried a triple that gave Columbian a 132-128 lead with under a minute remaining before Perez practically secured the win by draining a floater over the outstretched arms of June Mar Fajardo and Charles Rhodes with 14 ticks left.

Fajardo managed to put San Miguel within one possession off a putback only to find out that there wasn’t enough time left to complete the comeback.

Perez finished with 34 points, 8 rebounds, 4 assists, and 4 steals, while Prosper delivered 40 points – with 20 coming in the maiden quarter alone – to go with 13 rebounds, 2 steals and 2 blocks.

Rashawn McCarthy was just as important in the triumph after chalking up 27 points, 14 assists, and 6 rebounds, while Khobuntin fired 8 points – all coming in the 4th and overtime periods.

Down by as many as 14 points, the Beermen managed to tie the game at 90-90 behind a personal 8-2 run by Kelly Nabong before forcing an extra quarter after Arwind Santos hit a key trey with a second left in regulation.

But San Miguel failed to take the upper hand in overtime and eventually suffered its second straight defeat with its playoff hopes slowly shrinking as the losses pile up.

Rhodes paced the Beermen with 26 points, 16 rebounds, and 5 assists, while Fajardo had 24 points and 15 rebounds.