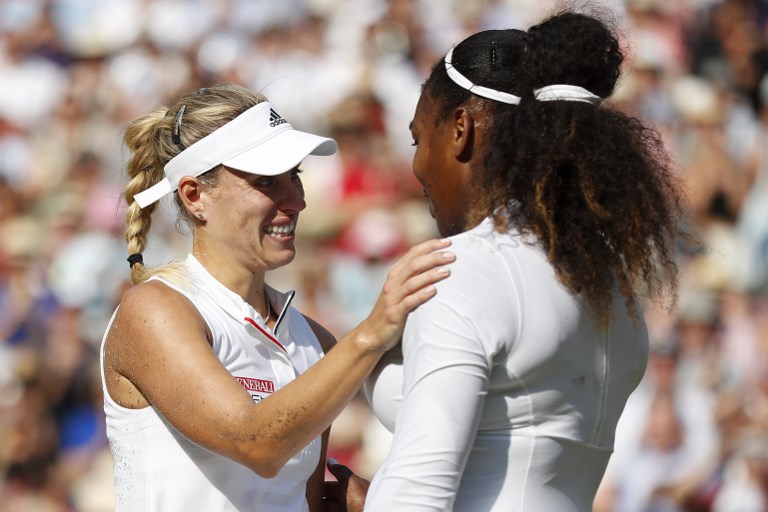 LONDON, UK – There are 7 Grand Slam winners in defending champion Angelique Kerber’s quarter of the draw at Wimbledon this year, but the German admits she is only conscious of one particular minefield – Serena Williams.

Kerber won her third career major at the All England Club last year to add to her triumphs at the 2016 Australian and US Opens.

Williams was her victim in the 2018 final as she avenged her loss to the 23-time major winning American in the final two years earlier.

“I don’t know everyone who is in my draw, I just know Serena is there. Heard it all the time already,” said the 31-year-old German on Sunday, June 30.

“Serena is one of the best players in the world. She’s a champion. To see how she is still competing and trying to coming back, trying to play her best tennis, she’s one of the toughest opponents to beat still.”

“Also with her experience, how she tries to play always her best tennis. Of course, young players are coming, but for me she is one of the best ones.”

Fifth-ranked Kerber will have plenty of challenges before she even contemplates facing seven-time champion Williams who she can’t meet before the last 16.

Also in her section are new world No. 1 and French Open winner Ashleigh Barty, 2017 Wimbledon champion Garbine Muguruza as well as 2004 US Open and 2009 winner Svetlana Kuznetsova.

It’s enough to put even an experienced player such as Kerber under pressure, especially when it comes after a roller-coaster career at the Slams which has often seen her flatter to deceive when defending a title.

Her defense of her Australian Open in 2017 ended in the fourth round while her attempt to defend the US Open crown later that year was over in a flash, with Naomi Osaka applying the knockout blow in the first round.

At Roland Garros this year, her hopes of completing the career Grand Slam were also dashed at the first hurdle when Kerber fell to Russian teenager Anastasia Potapova.

Happily for Kerber, she has not lost in the first round at Wimbledon since 2011.

“Wimbledon is more like mentally, also you have the experience of playing a lot of matches on grass, which is completely different to the other surfaces,” said Kerber.

“Here you feel a completely different energy. When you come here, you have pressure, the nerves are much higher than usual.” – Rappler.com