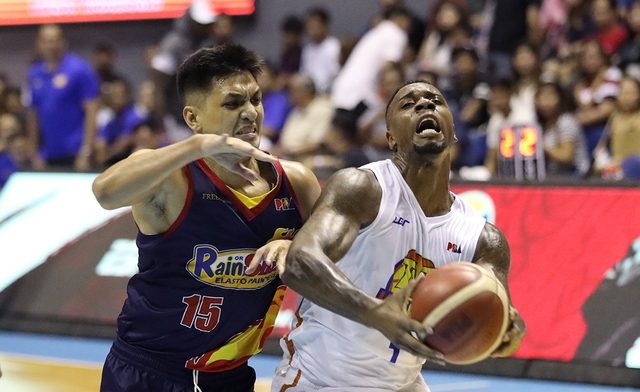 Facebook Twitter Copy URL
Copied
Terrence Jones links up with Roger Pogoy and Jayson Castro as the KaTropa solidify their hold of the No. 1 ranking

MANILA, Philippines – Import Terrence Jones notched his second triple-double in the PBA to lift TNT to a 102-81 romp of Rain or Shine in the 2019 Commissioner’s Cup at the Araneta Coliseum on Wednesday, July 3.

Jones submitted 33 points, 21 rebounds, 13 assists, 4 steals, and 2 blocks – all game-highs – as the KaTropa solidified their hold of the No. 1 ranking by earning their eighth win in 9 outings.

Locals were also crucial with Roger Pogoy delivering 19 points, 7 rebounds, 3 steals, and 2 blocks, and Jayson Castro firing 15 points on top of 6 rebounds, and 5 assists in the victory that saw TNT break the game wide open early.

Trailing by a whisker after the maiden period, 24-25, the KaTropa turned the tides behind Jones and Pogoy to head into the halftime break up 56-42.

Jones and Pogoy were magnificent in the 2nd quarter, combining for 21 points and outscoring the Elasto Painters by themselves.

Castro then took charge in the final frame as he drained back-to-back three-pointers for a 93-76 advantage to restore order for TNT after Rain or Shine narrowed the gap to 7 points with a strong third-quarter surge.

Also making their presence felt in the win were Don Trollano, who had 13 points and 8 rebounds, and Ryan Reyes, who added 7 points and 5 rebounds.

Denzel Bowles carried the scoring load with 28 points, 8 rebounds, 2 steals, and 2 blocks, but the Elasto Painters could not even their record as they crashed to their second straight loss for a 3-5 card.

Rookie Javee Mocon was the only other Rain or Shine player in double figures with 19 points, 10 rebounds, and 5 assists.