Caloy believes Rain or Shine can still turn campaign around 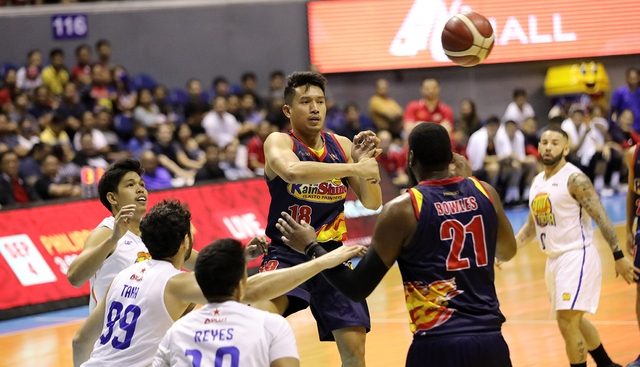 MANILA, Philippines – Down but not out.

Caloy Garcia has high hopes that Rain or Shine can turn its campaign around in the PBA Commissioner’s Cup as it absorbed its fifth loss in 8 outings with just 3 games left in the elimination round.

Rain or Shine is barely in the playoff picture at 8th place after dropping an 81-102 decision to TNT on Wednesday, July 3.

“We’re playing 3 good teams in Alaska, Magnolia, and San Miguel. We’re hoping that we can at least get 2 wins out of 3. I told them I believe that we can make that happen,” Garcia said in a mix of Filipino and English.

For that to happen, the locals need to complement what import Denzel Bowles brings every game.

Bowles played terrific against TNT, scoring 28 points on top of 8 rebounds, 2 blocks, 2 steals, and 2 assists in more than 43 minutes.

However, there was just one Rain or Shine local in double figures (Javee Mocon with 19 points), followed by only two with 8 points (Gabe Norwood and Mark Borboran).

“I told them that it’s not the end of the road. The way things are going right now, we have to have our players play consistently on both sides, on both offense and on defense.”

Rain or Shine looks to get back on track against Alaska (4-5) at the Mall of Asia Arena on Saturday, July 6. – Rappler.com