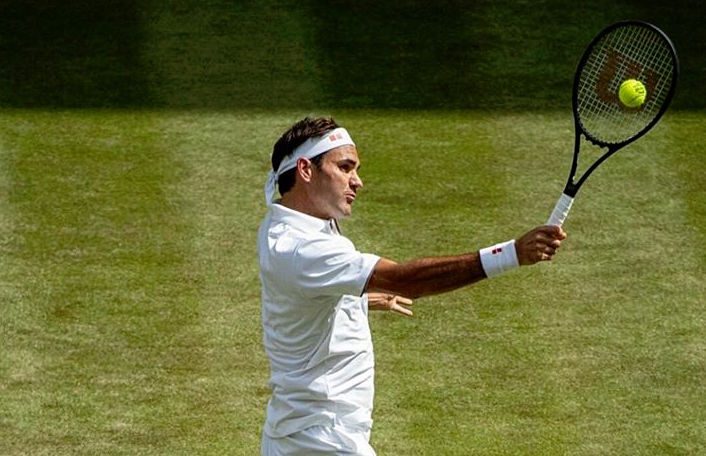 Federer registered a record 350th win in Grand Slam matches in his 7-5, 6-2, 7-6 (7/4) victory over Lucas Pouille of France and in the process reached the fourth round for an unprecedented 17th time.

“It’s a nice number to achieve. I’ve enjoyed my time at the Slams,” said Federer, who next plays Matteo Berrettini of Italy, of his Grand Slam record.

“It’s been nice winning that much.”

Earlier, his great rival and two-time Wimbledon champion Rafael Nadal had a much more enjoyable experience than his previous match as he eased into the last 16 with a 6-2, 6-3, 6-2 romp over French veteran Jo-Wilfried Tsonga.

The ease with which Nadal made the 4th round for the ninth time was replicated on the women’s side by Ashleigh Barty, who will be breaking new ground in appearing in the last 16 for the first time.

Seven-time women’s champion Serena Williams is also into the second week for the 16th time.

Nadal, who embraced Tsonga fondly at the end in stark contrast to the chilly handshake he had with fiery Australian Nick Kyrgios in the previous round, said he was delighted with the manner of his victory.

“I was very happy. I played a great match from the beginning to the end,” said Nadal.

He next plays Portugal’s Joao Sousa who ended British hopes with a five-set win over Dan Evans.

Andy Murray’s hopes of men’s doubles glory ended early as he and French partner Pierre-Hugues Herbert went out in the 2nd round.

However, he was to end the day on a celebratory note as his star partnership with Williams eased into the second round of the mixed doubles beating Germany’s Andreas Mies and Alexa Guarachi of Chile 6-4, 6-1.

Neither would claim who was running the show.

Serena said there was no “I in team” while Murray said they were both used to being told what to do.

“I said to Serena before the match we are the younger siblings so we are used to being bossed by our older brother and sister,” said Murray

On the women’s side Barty and Williams could meet in a blockbuster quarter-final if they win their last 16 matches on ‘Manic Monday’.

While Barty will be in new territory playing singles at Wimbledon in the second week for the first time, for Williams it is the 16th.

‘Such a buzz going around’

Barty, bidding to become the first Australian Wimbledon women’s champion since Evonne Goolagong Cawley won her second title in 1980, will play unseeded American Alison Riske for a place in the last eight.

She is also the first Australian woman to make the second week since 2010.

Williams goes on to face Spain’s Carla Suarez Navarro for a place in the quarter-finals.

“It’s been an arduous year for me, so every match I’m hoping to improve tons,” said Williams, who had a knee problem which affected her season.

There was no fairytale win in the mixed doubles, though, for the star of the championships Coco Gauff.

The 15-year-old American – who has wowed the crowds in reaching the last 16 of the women’s singles – and her British partner Jay Clarke lost 6-1, 6-4, in the first round to Robert Lindstedt and Jelena Ostapenko. – Rappler.com