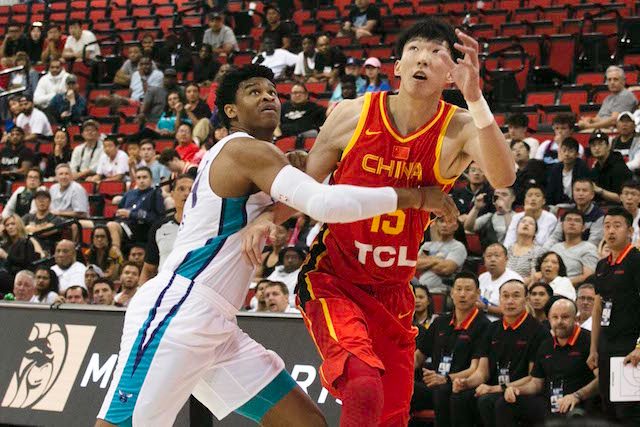 LAS VEGAS, USA – Team China showed its toughness and cohesiveness as it clinched its first win in the 2019 NBA Summer League over the Charlotte Hornets, 84-80.

The Chinese earned the victory after losing by big margins in their first two games while they beef up preparations for their upcoming hosting of the 2019 FIBA World Cup.

China’s center Zhou Qi led the team with 17 points, 9 rebounds, and 3 blocks. After the game, he already had fans wanting to have their photos taken with him and getting his autograph.

It was a close game in the 1st quarter, but Zhou sank back-to-back three-pointers and a dunk that thrilled the predominantly Chinese crowd watching the nightcap at the Cox Pavillion.

China was able to break away in the 2nd and 3rd quarters, leading by as much as 14 points. The Chinese were also winning the rebounding battle, grabbing 30 against the Hornets’ 19 at the end of the 3rd quarter.

The Hornets tried to mount a comeback, but costly errors and the physicality of the Chinese players locked them down.

The short-handed Hornets – who were resting Miles Bridges, Dwayne Bacon, and Malik Monk – were led by Lithuanian forward Arnoldas Kulbolka with 18 points, 4 rebounds, and 3 out of 8 from the three-point line.

“They played a different kind of basketball. It’s tough for us. We’re not used to it. In the end, we were able to adjust, but wasn’t enough,” said Kulbolka, the Hornets’ 2018 second-round draft pick.

“The size and physicality of China got to us. We had a better handle of them in the second half. Not so much in the first,” Hornets Summer League coach Ronald Nored said in the post-game conference.

Team China serves notice to other teams at the #FIBAWorldCup by edging the Charlotte Hornets 84-80 at the #NBASummerLeague ! It’s China’s first win in 3 games at this tourney.

This is China’s first appearance in the NBA Summer League since the competition’s debut in 2007. Croatia is the other team playing in this year’s Summer League, also using it as a buildup to the FIBA World Cup. – Rappler.com