Rain or Shine boosts playoff bid with escape over Magnolia 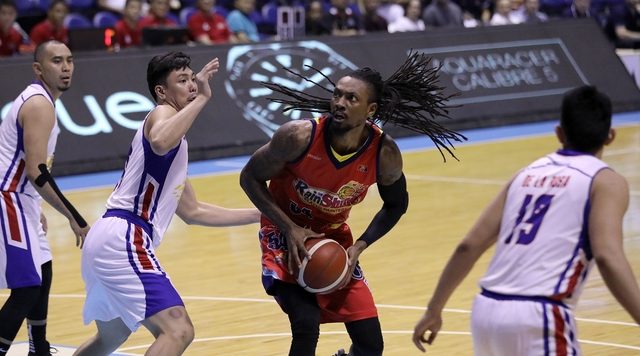 MANILA, Philippines – Rain or Shine denied Magnolia entry to the playoffs with an enthralling 86-82 escape in the 2019 PBA Commissioner’s Cup at the Araneta Coliseum on Wednesday, July 10.

Beau Belga and new import Carl Montgomery both breached the 20-point mark as the Elasto Painters bolstered their own playoff bid by picking up their second straight win for an even 5-5 record.

Belga had one of his best games of the conference with 22 points and 5 rebounds off the bench, while Montgomery – who replaced the injured Denzel Bowles – contributed 20 points, 12 rebounds, 4 assists, 2 blocks, and 2 steals.

The young guns were just as crucial for Rain or Shine in the win, with Javee Mocon, Ed Daquioag, and Kris Rosales leading their fourth-quarter surge.

It was a tied game at 69 early in the final frame before the Elasto Painters unloaded an 11-0 bomb – sparked by 7 straight points from Mocon and capped by back-to-back Rosales and Daquiaoag buckets.

The Hotshots, though, did not waver and knocked down 3 straight triples from Mark Barroca and Jio Jalalon to cut their deficit to 4, 78-82, with less than 3 minutes remaining.

However, Magnolia ran out of time from completing the comeback as it absorbed its third straight loss for a 5-5 slate and missed a chance of securing its quarterfinal berth.

Ian Sangalang paced the Hotshots with 24 points, 8 rebounds, and 2 blocks before fouling out late, while import James Farr added 19 points and 23 rebounds.