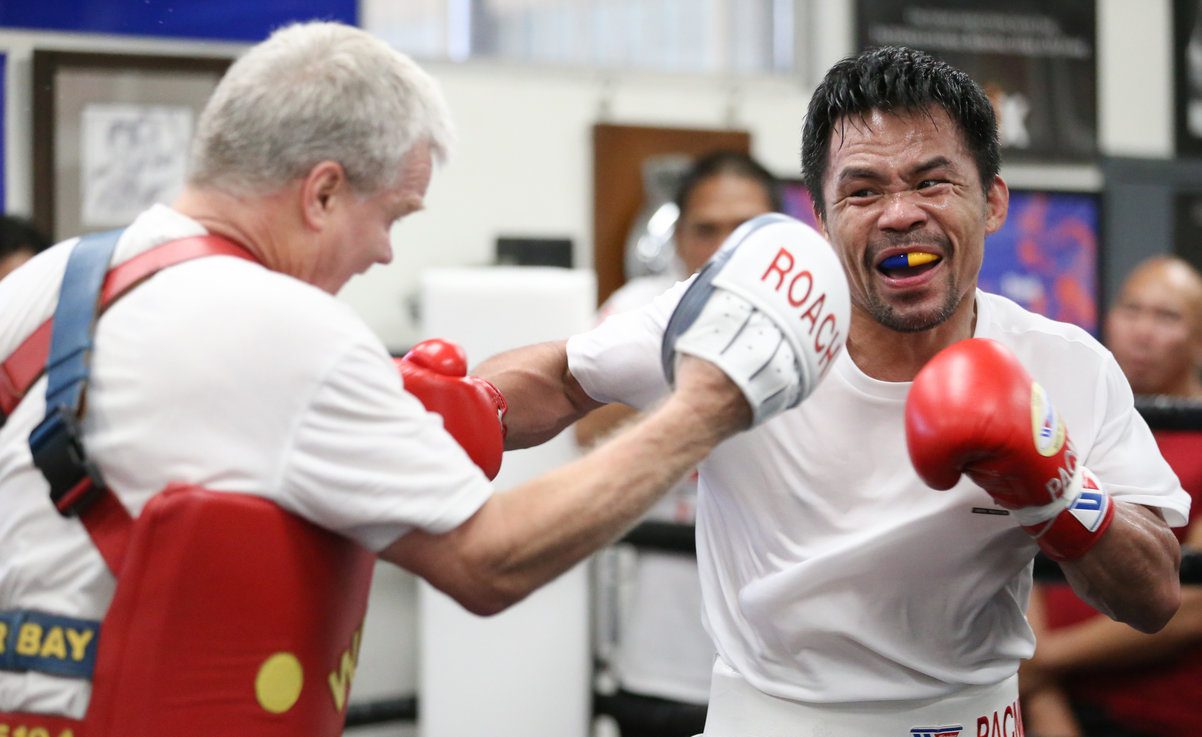 LOS ANGELES, USA – Trainer Freddie Roach said he hopes Manny Pacquiao can set up a rematch with Floyd Mayweather after the Filipino legend takes care of business against Keith Thurman in Las Vegas this month.

Roach told reporters he was still bothered by Pacquiao’s defeat to Mayweather in their 2015 clash, which was hyped as the “Fight of the Century” but ultimately left boxing fans disappointed.

Pacquiao later said a shoulder injury had hampered his performance during the 12-round defeat, while Mayweather headed into retirement later that year with an unblemished record.

Pacquiao, who retired briefly in 2016 only to return later that year, has continued to fight on, however.

The 40-year-old Filipino will attempt to capture the World Boxing Association welterweight crown on July 20 when he faces unbeaten American champion Thurman at the MGM Grand.

Roach, Pacquiao’s trainer for the bulk of his two-decade career, hopes that a victory over Thurman could pave the way for a rematch with Mayweather if he can be persuaded to step into the ring once more.

“Hopefully we can get Mayweather to come to the table,” Roach told reporters at his Wild Card gym on Wednesday, July 10. “I would like us to have one more crack at him.”

“We didn’t fight a great fight that night. Manny’s shoulder didn’t help at all. He’s had surgery since then, he’s 100% now.

“I would like us to fight Mayweather again because I didn’t like the way we performed. I was disappointed in myself.”

Pacquiao, meanwhile, has been more circumspect about the prospect of a rematch, insisting he is not thinking of Mayweather as long as he remains retired.

“Floyd is retired. I am only looking at active fighters. Floyd is not active anymore,” Pacquiao said. “Right now I’m only thinking about Thurman.”

Speaking at his training camp in Florida on Wednesday, the hard-hitting Thurman (29-0, 22 KOs) confidently predicted a quick knockout over Pacquiao.

“We’ve got 22 and we’ve held those 22 knockouts for a little too long. It’s time to get one more knockout.”

Roach, however, believes Pacquiao’s superior conditioning and handspeed will give him an advantage as the fight goes on.

“Thurman starts quickly but he usually fades,” Roach said. “I like Pacquiao in the later rounds because that’s where he usually excels. I don’t like making predictions but I don’t see this one going the distance.” – Rapppler.com