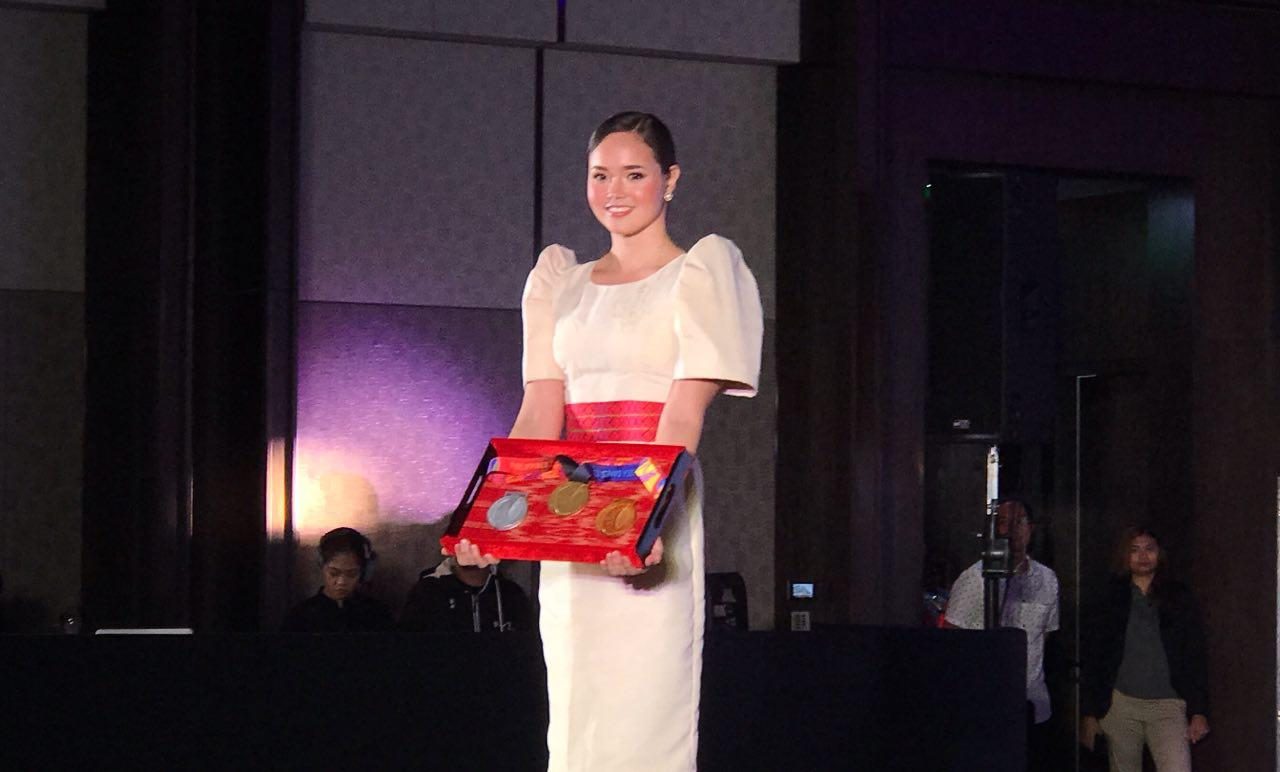 MANILA, Philippines – It’s no surprise that the 2019 Southeast Asian Games will be a celebration of Filipino culture.

Filipino artists get to showcase their talents in the designs of the officials’ uniforms, medals, and torch when the country hosts the regional biennial meet. (WATCH: 2019 SEA Games launches theme song by Ryan Cayabyab)

Here are some of the looks that we’ll see in the event that will run from November 30 to December 11:

The proposed design of the medals highlight an engraved aerial view of the New Clark City athletics stadium.

The design in front features the 30th SEA Games logo, as well as the host country’s name.

This is the proposed design of the gold, silver and bronze medals. It is engraved with the photo of the New Clark City stadium. #2019SEAGames | @beebeego09 pic.twitter.com/pE3hcN1eBn The torch’s design is inspired by the Filipino national flower – the sampaguita – which symbolizes purity, simplicity, humility and strength.

The hammered portions of the torch, a product of Filipino metal works, is a representation of the rays of the sun in the Philippine flag.

This is the proposed design of the torch to be used in the #2019SEAGames.

The design is inspired by the Philippine National flower, the sampaguita. | @beebeego09 pic.twitter.com/YbWowxLGWC The presenters during the awarding ceremony will be donning the country’s traditional costumes – the Balintawak dress, the Barong Tagalog and Baro’t Saya.

The Balintawak dress (left), also known as the mestiza dress, is characterized by a shortened skirt and puffy butterfly short sleeves.

The Barong Tagalog (center) is the formal men’s wear of the Philippines that is made out of indigenous fabrics and is worn over an undergarment called camisa de chino.

The Baro’t Saya (right) is a two-piece outfit, where the top is made of the local handwoven piña fabric and jusi fabric, while the skirt’s pattern is inspired by traditional Ifugao textiles.

All of the costumes have the 30th SEA Games logo embroidered on the top left corner of the blouses. The Southeast Asian Federation (SEAF) officials will sport a blue polo shirt and jacket, while the technical officials will wear a green version. For the volunteers, they will be assigned to wear a red polo shirt of the same design while the Philippine SEA Games Organizing Committee (PHISGOC) will be in navy blue.

The SEA Games volunteers will be dressed in a red polo shirt during the multi-sport event. #2019SEAGames | @beebeego09 pic.twitter.com/rh01J2hSNX Laurel was able to create two sets of uniforms for the women, while the men will have 3 kinds to choose from.

The first set of uniforms presented were in a black blazer style, which is highlighted by silver embroidery in the center.

The SEA Games business uniform has a Filipino-inspired design on the blazers for both men and women. #2019SEAGames | @beebeego09 pic.twitter.com/yijZ0LNmsN

The second set is in white, which is similar to the style of the Filipino national costume. The women’s outfit is a long-sleeved blouse with a sash around the waist, while the men will have two options for the white business uniform.