MANILA, Philippines – The EAC Generals nailed the biggest upset yet of the NCAA Season 95 after eking out an 84-82 win over two-time finalist Lyceum Pirates at the FilOil Flying V Centre on Friday, July 12.

After being down by as many as 18 points late, the Pirates still snatched away the lead late in the 4th after the trademark drives of the Marcelino twins. Jayvee Marcelino clinched a 77-76 edge for the Pirates at the 3:34 mark of the 4th off an and-one layup, completing a 31-12 run from their 18-point hole.

However, Mendoza doused Lyceum’s fire right after with two straight killer threes for an 82-77 lead. Still, the Pirates managed to tie the game one more time off another Marcelino and-one, 82-all, this time from Jaycee with 55 seconds left in regulation.

But Mendoza would not be denied of his time in the spotlight as he sank one last go-ahead bucket off a pass from Taywan with 1.5 ticks left.

Lyceum tried an inbound alley-oop off the timeout to tie the game, but the ball got intercepted as time expired, prompting the EAC bench to erupt in cheers. 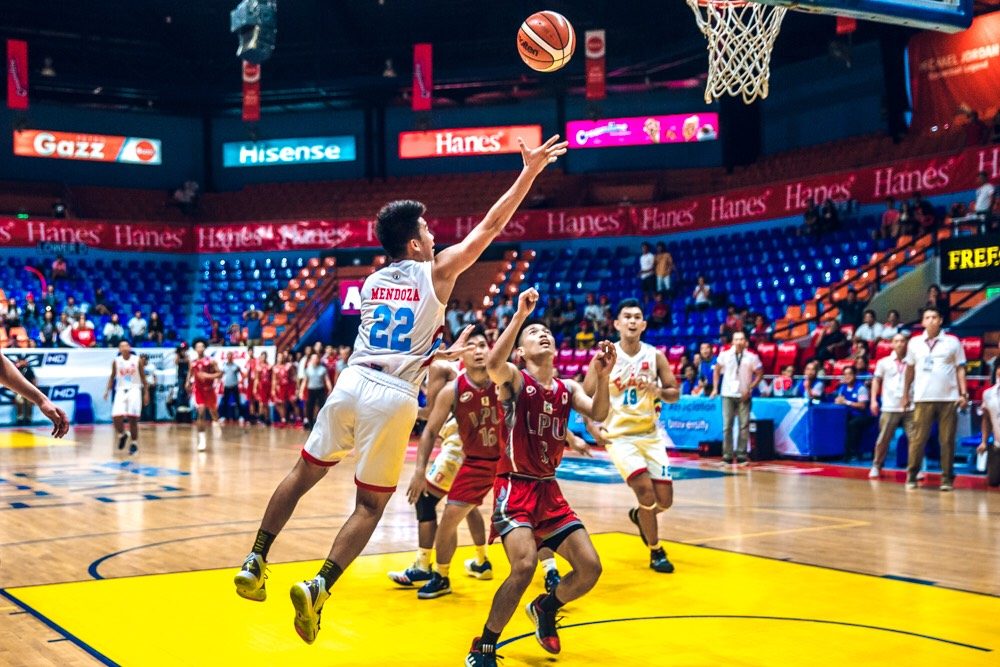 The Letran Knights also provided a thrilling contest as they outgunned the Arellano Chiefs, 81-72, in the middle game of the triple-header.

As both teams were hungry for their first win after losing in the opening day, their contest against each other went neck and neck until the 4th quarter.

However, after Jeo Ambohot gave Letran a four-point cushion at the 7:20 mark, captain Jerrick Balanza followed right after with a personal 11-3 eruption against the stunned Chiefs defense.

When the dust settled, Balanza had given Letran a 12-point lead, 79-67, after an open layup at the 2:21 mark. At that point, Arellano simply did not have enough time to mount a comeback.

Balanza finished with a collegiate career-high 31 points on a 10-of-18 shooting with 3 rebounds and 2 assists while Ambohot chipped in 15 markers and 11 boards.

Rence Alcoriza led Arellano in the losing effort with 19 points and 4 rebounds. Coming off an opening day win over Arellano, the San Beda Red Lions proved too much for Jose Rizal University, scoring a 74-52 demolition of the Heavy Bombers.

The three-peat defending champions started the game firing from all cylinders, establishing a 15-0 lead early on and never looked back, leading by as much as 23 by the end of the 3rd frame.

Calvin Oftana and James Canlas did the heavy lifting for the Red Lions, putting up 17 markers apiece, but it was Evan Nelle who stole the limelight for his playmaking.

The sophomore point guard struggled scoring but was effective on the offensive end by dishing out 14 assists, 11 in the 1st half alone.

“It was a bad game for me. I couldn’t shoot so I thought when Calvin, James, and Clint [Doliguez] were making their shots, just pass it to them and create for them,” said Nelle, who wound up with only 5 points.

Despite the methodical win for San Beda, coach Boyet Fernandez was quick to point out what they can improve on especially after scoring only 8 in the final frame.

“We gave up 52 points against JRU and coach Louie [Gonzalez] did a good job in adjusting, that’s why we only scored 8 in the 4th,” said the multi-titled mentor. “But a win is a win so we look forward to the next.”

– With a report from Ferdin Sanchez/Rappler.com