Davis confident Lakers roster can go up ‘against anybody’ 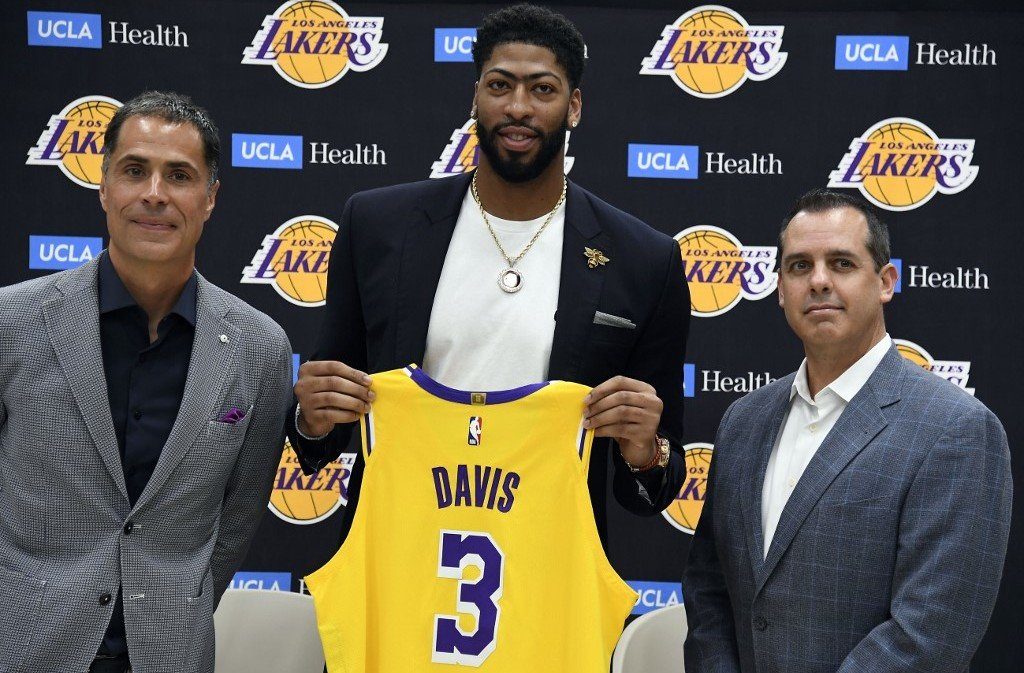 Facebook Twitter Copy URL
Copied
As Anthony Davis forms a potent strikeforce with LeBron James, the Lakers think they can immediately contend for the NBA championship

LOS ANGELES, USA – Anthony Davis said the Los Angeles Lakers will be capable of challenging for the NBA championship immediately next season as the six-time All-Star was formally unveiled by the organization on Saturday, July 13 (Sunday, July 14, Philippine time).

The 26-year-old superstar is set to form a potent strikeforce alongside LeBron James after joining the Lakers following a blockbuster trade deal with the New Orleans Pelicans last month.

The Lakers, who missed the playoffs last season for a sixth straight year despite the arrival of LeBron James in 2018, will field a new-look lineup for the 2019 campaign which also includes new signings Danny Green and DeMarcus Cousins.

With the Lakers also starting the campaign with a new head coach in Frank Vogel, there is a possibility the roster may take time to gel.

But a bullish Davis, however, is adamant the Lakers can make an instant impression as they attempt to re-establish the team as a force in the NBA.

“I’ll put our roster up against anybody,” Davis told a press conference. “In a seven-game series, I think we’ll come out victorious.”

Lakers general manager Rob Pelinka told reporters that the acquisition of Davis could be a “history-shifting” chapter for the franchise, lavishing praise on the new signing’s versatility.

“There is no more complete basketball player in the game,” Pelinka said.

“There is nothing he can’t do. He can shoot. He can make plays. He can defend 1-5. He can protect the rim. He can handle the ball. His dedication to his craft is unparalleled.”

Davis meanwhile said he couldn’t wait to form a partnership with James, after brief previous experiences alongside him during All-Star games and at the Olympics.

“To get a full season and to see the things he’s able to do – pass, shoot, talks well defensively, great leader, so I’m excited to get a lot of that this season, and just go from there,” said Davis, who revealed he learned about his trade last month after seeing it posted on Instagram.

Davis added he expects to play a full part in the Lakers season next year, brushing off a question about “load management.”

Davis will wear the No. 3 jersey next season after an offer from James to allow him to keep his preferred No. 23 hit a snag.

The jersey number offer from James was scuppered after opposition from sponsors Nike, who had potentially been faced with the prospect of being stuck with millions of dollars worth of “James 23” jerseys if the deal had gone ahead. – Rappler.com