‘Not good news’ for Ginebra as San Miguel or Magnolia awaits 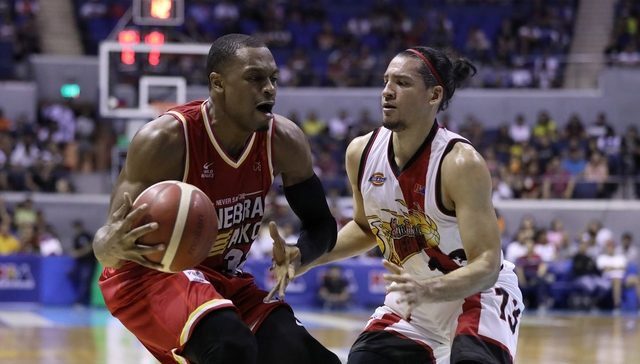 MANILA, Philippines – Barangay Ginebra will immediately need to go through the eye of the needle as it begins the playoffs against either San Miguel or Magnolia in the PBA Commissioner’s Cup, and Justin Brownlee said it’s bad news.

“Either one, for sure? Oh man. No matter what happens, either one? Oh wow, man,” a surprised Brownlee said when he was informed of the Gin Kings’ potential quarterfinal pairing against either the Beermen or the Hotshots.

“It’s not good news. You know, the quarterfinals, usually it may be a slightly lighter opponent, but at this point, it really doesn’t matter who we play.”

Magnolia had beaten Ginebra in their last two playoff series meetings, coming out victorious in the semifinals of their Governors’ Cup clash last season and in the quarterfinals of their Philippine Cup duel a couple months back.

San Miguel, meanwhile, has been undefeated for the last 3 games since new import and former NBA player Chris McCullough came in to revive its playoff campaign.

Also, both teams won a championship in the past two conferences, with the Hotshots ruling the Governors’ Cup and the Beermen reigning supreme in the Philippine Cup.

But Brownlee said no matter who their opponent will be, they will have to pull out all the stops nonetheless.

“We’re going to have to come out, and if we want to win, just come out and perform at the top of our game. You know, have to bring our A-plus performance each and every game. So it really doesn’t matter,” he said.

“You know, we know that whoever we play, we’re going to have to come in and give it our all if we want to win.”

Magnolia and San Miguel are currently tied with identical 5-5 slates and both have one game left in the elimination round.

If both finish with the same record, the Hotshots will occupy the No. 5 spot since they defeated the Beermen earlier in the conference and will therefore face the No. 4 Gin Kings.

The only chance that San Miguel will tangle with Ginebra is if it wins its final game against Meralco and if Magnolia falls to TNT.

“We know we’re going to have a dogfight with either team,” Brownlee said.

Brownlee looks to carry the momentum he gained from scoring a career-high 50 points in a 127-123 overtime win over Columbian on Sunday, July 14, as the playoffs kick off over the weekend. – Rappler.com