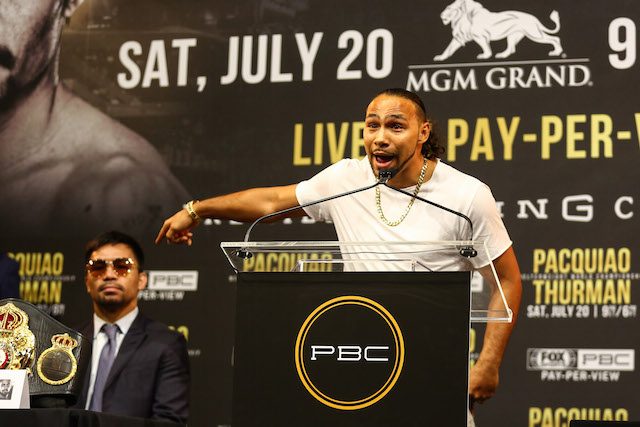 Facebook Twitter Copy URL
Copied
'To become a legend you have to beat a legend,' says Keith Thurman

Thurman knows if he passes the Pacquiao test he will not only extend his legacy as an unbeaten champion (29-0 with 22 knockouts), but become a legend himself.

“To become a legend you have to beat a legend,” said Thurman, who’s confident he’ll include Pacquiao in his list of victims after their unifying duel for the World Boxing Association welterweight crown.

According to Thurman, Pacquiao, not being a technical fighter, is bound to commit mistakes and he’s going to pounce on such opportunities in the pay-per-view bout slated July 20 at MGM Grand in Las Vegas. (READ: Pacquiao ready if Thurman adapts Marquez’s strategy)

“I’m going to expose certain things round by round,” said Thurman, referring to Pacquiao’s perceived flaws he saw with trainer Dan Birmingham in the course of their preparations at St. Petersburg Boxing Club.

The 30-year-old Thurman believes he has a better ring IQ than Pacquiao despite their 10-year gap and the extensive wars (61-7-2, 39 KOs) the eight-division world champion have been through.

And he promised to flaunt it on fight night.

Aware that Pacquiao is probably his toughest opponent yet, Thurman knows there’s no room for complacency.