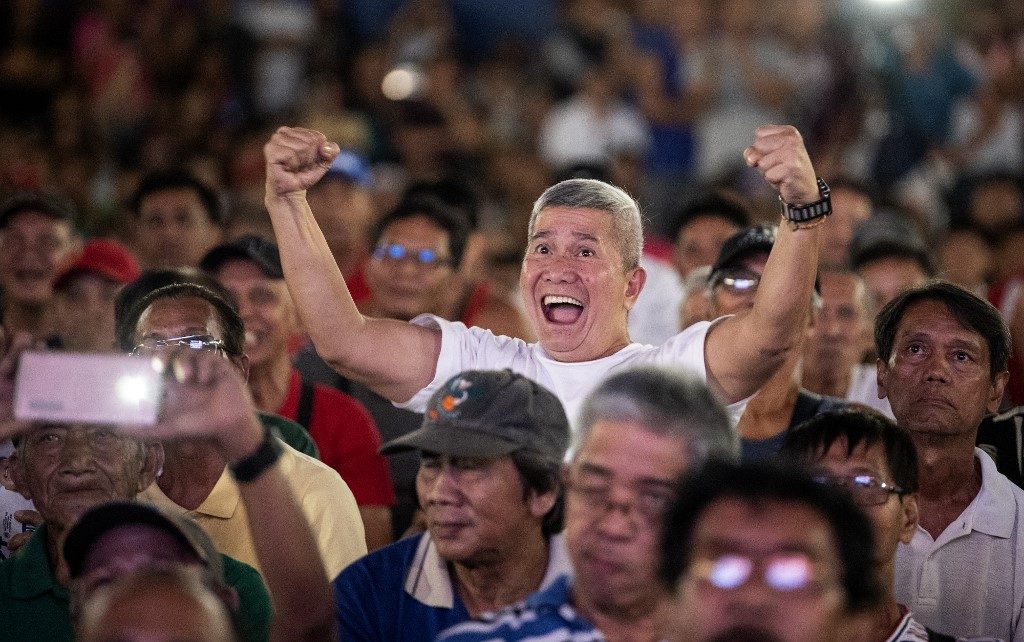 MANILA, Philippines – Fans in the Philippines on Sunday, July 21, roared their approval and rose to their feet imitating the punches of Manny Pacquiao as they declared that their idol was still a boxing force at the age of 40 with his stunning victory over American Keith Thurman.

Filipinos from street vendors to lawmakers went wild, pumping their fists in the air during the 1st round of the welterweight fight as Pacquiao floored the WBA champion 10 years his junior, and went on to win by split decision.

Despite Thurman’s threat to send Pacquiao into retirement in the Las Vegas showdown, fans of the eight-division world champion were thrilled to see him eat his words as they packed into gyms, military camps and movie theaters all over the country to watch the fight.

“It was wow, wow, wow! He is amazing. He showed himself a true Filipino, a hero,” 51-year-old Raquel Sanders told AFP after watching the bout in a Manila sports complex.

The excitement also lit up the online world with fans in the social media-obsessed nation using the hashtag #StillA40rce.

“Senator Pacquiao proved that age is just a number and (he) still can make another legend,” said Twitter user @rinrin_irene.

However, tragedy dampened the mood in Manila’s Marikina suburb where a 68-year-old fan collapsed as he was watching the bout in a gym. He was rushed to the hospital but declared dead on arrival, police said.

The man had a heart illness and could have gotten “excited” and “overjoyed” upon watching Thurman getting knocked down, Marikina police said, but added doctors had yet to issue a medical report.

Pacquiao is considered a national hero by many as his athletic feats have put the Philippines on the boxing map.

His rags-to-riches rise from high school dropout to millionaire champion is a source of inspiration in a nation mired in poverty.

But Pacquiao, also an elected senator, stirred controversy when he entered politics as he endorsed the death penalty and issued gay slurs in 2016 for which he apologised for.

“Our pound-for-pound King did not show any signs of intimidation as he embodied what a Filipino spirit is all about – a fighter,” Salvador Panelo said in a statement.

Some Pacquiao fans said while their idol had proven his mettle, he showed signs of aging.

“He can still fight but not a long bout because he gets tired. A younger fighter would have more endurance than an older fighter,” said Willieboy Ramos, 50.

Pacquiao, who reversed a 2016 decision to retire, repeatedly says boxing is his passion and he still feels young.

Philippine boxing chief Ed Picson said only Pacquiao could decide on his future.

“His place in world boxing as a legend is secure… He has nothing more to prove,” said Picson, secretary general of the Association of Boxing Alliances in the Philippines. – Rappler.com