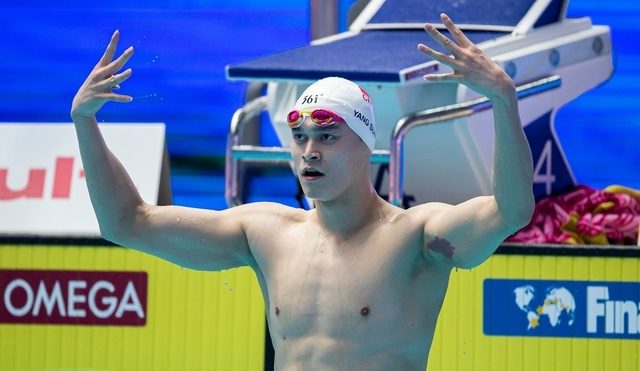 Facebook Twitter Copy URL
Copied
Amid the heated podium protests due to doping suspicions, Sun Yang says he has 'nothing to prove' and doesn't deserve the insults from fellow swimmers

GWANGJU, South Korea – China’s Olympic swimming champion Sun Yang has hit back at sniping rivals accusing him of doping violations, telling them: “I’m standing up for all of you!”

Athletes have vilified Sun at the world swimming championships in South Korea this week following a leaked FINA doping panel report that alleged the Chinese giant allowed blood vials to be smashed with a hammer after being visited by testers last year.

FINA cleared Sun to compete after agreeing that the testers had failed to produce adequate identification or follow correct protocol, prompting World Anti-Doping Agency (WADA) to appeal that decision to the Court of Arbitration for Sport (CAS).

“I shouldn’t have to put up with these kinds of insults,” growled Sun after closing his punishing Gwangju schedule in the men’s 4x200m free on Friday.

“But I have a big heart – there are millions of athletes in the world and if a few want to hurl insults, I can take it,” added the 27-year-old.

“It’s pointless arguing with them, it means nothing to me. FINA made it clear I didn’t commit any doping violation. What I’m doing is protecting the rights and interests of every athlete.”

FINA had issued a warning that swimmers may be stripped of their medals or face a ban if the heated podium protests continue, noting that the incident had hurt the sport’s image,

The 11-time world champion grew suspicious of the independent testers who knocked on the door of his Hangzhou villa late at night last September, insisting they were not properly accredited.

“Imagine if testers without the right documents show up at your home to take blood and urine,” said Sun, whose case is set to be heard by CAS in September.

“And if they make out a false report, I would have no opportunity to argue,” he added.

“Every word I’ve said is true and I have all the evidence to prove it. I’m simply standing up for myself and every athlete out there.”

Sun’s Australian coach Denis Cotterell told AFP that the swimmer had been made a scapegoat for grievances against FINA, the sport’s governing body.

“He’s not a drug cheat,” said Cotterell. “He takes meticulous care with what he ingests. You can’t have the performances he’s had over the years without doing the work. He’s been tested year in, year out – hundreds of tests, winning every year over this period of 10 years.”

Horton began his war of words with Sun back at the 2016 Rio Olympics when he labelled his hulking rival a “drug cheat” in reference to a three-month suspension Sun had served after testing positive for trimetazidine, an ingredient in his heart medication.

WADA accepted Sun had not intentionally taken a banned substance, but the acrimony triggered in Rio has been amplified in Gwangju, where several top swimmers, including Olympic champions Adam Peaty and Lilly King, have spoken out against China’s sporting hero.

“I don’t have to get involved in name-calling,” sniffed Sun before departing South Korea.

“I have nothing to prove. I just know I don’t deserve to be insulted in that way.” – Rappler.com