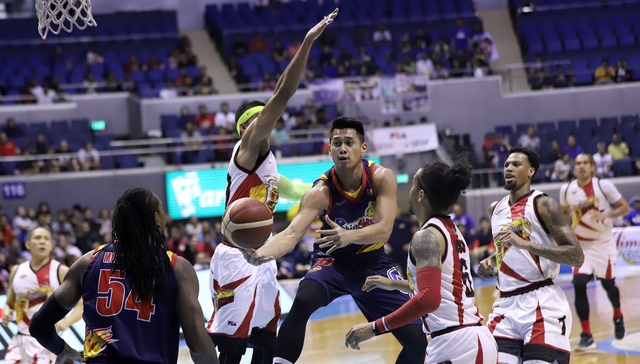 MANILA, Philippines – Rain or Shine wasted a double-digit lead anew but got the job done this time against San Miguel, 112-104, in Game 3 of the 2019 PBA Commissioner’s Cup semifinals at the Araneta Coliseum on Wednesday, July 31.

Gabe Norwood and Beau Belga hit crucial three-pointers late as the Elasto Painters shaved their series deficit in the best-of-five duel to 1-2 despite squandering an 18-point advantage in the first half.

The Beermen were primed to sweep the series and punch their ticket to the finals after being up 104-102 with less than two minutes left until Norwood and Belga powered a win-clinching 10-0 run.

Norwood beat the shot clock with a triple at the corner to give the Elasto Painters a 105-104 lead before Belga delivered the dagger with a pullup trey over June Mar Fajardo with 11 seconds remaining, 110-104.

Import Carl Montgomery chalked up 25 points and 15 rebounds, Rey Nambatac had 22 points off the bench, while Belga and Norwood put up 16 and 11 points, respectively, and conjoined for 12 rebounds and 10 assists.

Javee Mocon added 16 points and 6 rebounds in the victory.

Game 3, though, posed a scenario for Rain or Shine reminiscent of its 29-point collapse in its Game 2 loss after it led 37-19 early in the 2nd quarter but entered halftime with the score knotted at 54-54.

But the Elasto Painters did not crumble and showed composure in the second half, putting to waste Chris McCullough’s career-high 51 points on top of 14 rebounds and 3 assists for San Miguel.

Alex Cabagnot and Christian Standhardinger were the only other Beermen players in double figures with 16 and 14 points, respectively.