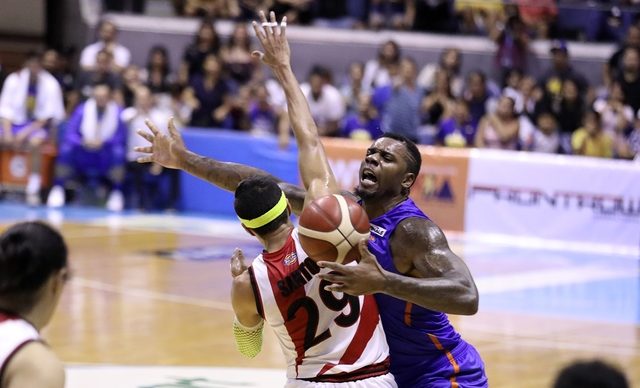 MANILA, Philippines – Terrence Jones said racism in any form should not be tolerated after being the subject of Arwind Santos’ monkey gesture in Game 5 of the PBA Commissioner’s Cup finals.

The San Miguel veteran was caught on camera mimicking an ape on the bench as he celebrated when the TNT import was called for a foul following a missed shot late in the first half.

Having not seen Santos’ action during the game, Jones issued a response on Thursday, August 15, after learning about it in the news.

“I don’t normally post responses to negative things said about me – but as a father and a black man – this can’t be ignored,” Jones posted on Instagram.

“I came to the PBA to play – and to share my talent – in a country where I have tremendous respect for its culture and its people. My son is of Filipino descent. I cannot and will not tolerate racial slurs and gestures.”

“They’re not only disrespectful to me but to my family and my race.”

Jones’ son Ajani is Filipino-American and has watched his father live in action in the PBA on multiple occasions.

“I teach my son to be proud of who he is and to be respectful of all.”

When asked about his behavior, Santos downplayed it to just “mind games” and was unapologetic to Jones. (READ: Arwind not sorry for monkey gesture towards Jones)

“This wasn’t a case of ‘mind games’ in an athletic competition – it was racism. Period.”

“Swift, significant action needs to be taken by the PBA to send a strong, clear message that racism in any form is unacceptable will not be tolerated.” (READ: PBA summons Arwind over monkey gesture on Jones) Jones and TNT seek to force a winner-take-all match when they meet San Miguel in Game 6 at the Araneta Coliseum on Friday, August 16. – Rappler.com