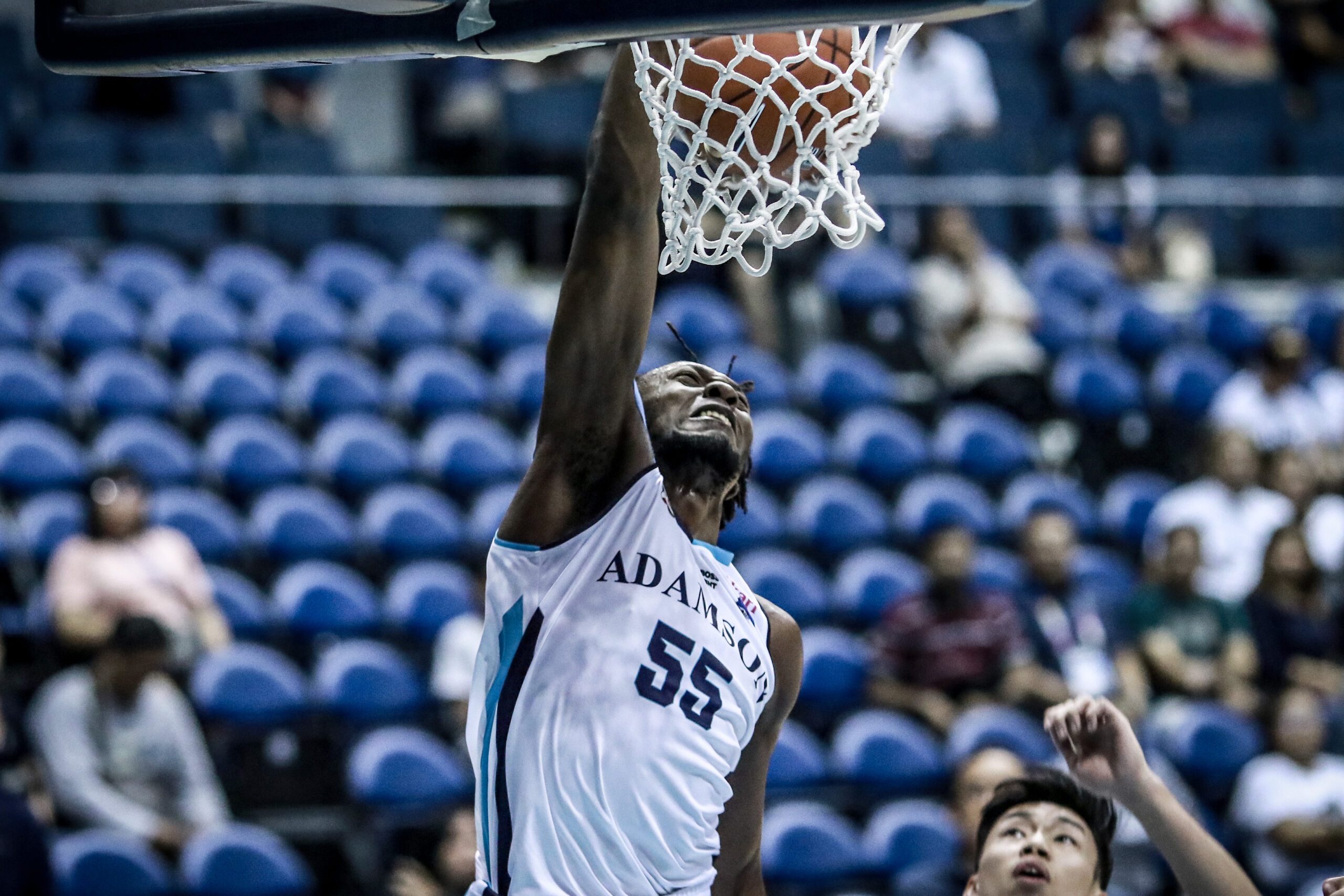 MANILA, Philippines – With all the Adamson shooters clamped down in their final possession, Lenda Douanga was left open and knocked in a stunning buzzer-beating triple as the Falcons managed to steal the game away from the NU Bulldogs, 84-83, in overtime in the UAAP Season 82 men’s basketball tournament at the Araneta Coliseum on Saturday, September 7.

Douanga capped a stellar double-double performance of 26 points and 19 rebounds with the Hail Mary shot, just when the young Bulldogs looked poised to complete an upset.

“We don’t think it was a lucky shot. It was a designed play,” said Adamson coach Franz Pumaren

It was all Dave Ildefonso in the extra period as he scored the Bulldogs’ first 5 points to give them a 79-78 lead with a little over two minutes left.

The second-year guard then made Simon Camacho pay for splitting at the line as he raced back for the nifty euro-step layup, 81-79, with 45 ticks left. However, Douanga got fouled on the other end right away and calmly sank the tying charities.

Off a timeout, Ildefonso then called isolation and sank a tough go-ahead layup over the outstretched arms of three Falcons with 1.4 left on the clock  that gave the Bulldogs an 83-81 edge.

But first-year center Duoanga responded and the victory averted an early upset as the Falcons, a semifinalist last season, bounced back from an opening-day loss to Ateneo for a 1-1 record.

“We needed that win. I guess we’re searching for the right combination and I think that’s the downside of having a young team and having new guys,” said Pumaren.

Ildefonso powered the Bulldogs with a game-high 29 points on top of 9 rebounds, 4 steals, and 3 assists.

Camacho added 14 points and 11 rebounds for the Falcons and Val Chauca also scored 13.

Ildefonso carried the NU momentum midway through the 4th as he buried 5 straight points to help the Bulldogs maintain a 65-58 lead.

Undeterred, the Falcon point guard duo of Jerom Lastimosa and Chauca stormed back within 2, 67-69, off a pair of jumpers in the final 2:22.

Chauca followed up his clutch trey with one more wild long bomb to take the 72-71 lead at the 1:35 mark. NU big man Issa Gaye then followed up with a go-ahead mid-range jumper, 73-72, in the next possession.

Adamson had a shot to take the lead anew, but Douanga fumbled the rock, resulting to a split trip at the line from Chino Mosqueda off a duty foul.

Douanga then made up for his mishap with a clutch tying putback, 74-all, off Camacho’s missed floater with 3.3 ticks left.

Ildefonso then got called for a travel off the inbound, but got back right away with a key deflection to send the game to overtime.

After a back-and-forth first half, Adamson caught fire with a 9-2 run to start the 3rd up, 40-32, ending with an Aaron Fermin triple at the seven-minute mark.

However, the Bulldogs clawed their way back with timely stops and tied the game 52-all with 1:40 left off a steal and score by new team captain Shaun Ildefonso.

Issa Gaye had 16 points and 4 boards for NU, while John Lloyd Clemente got 11 points and 6 rebounds.