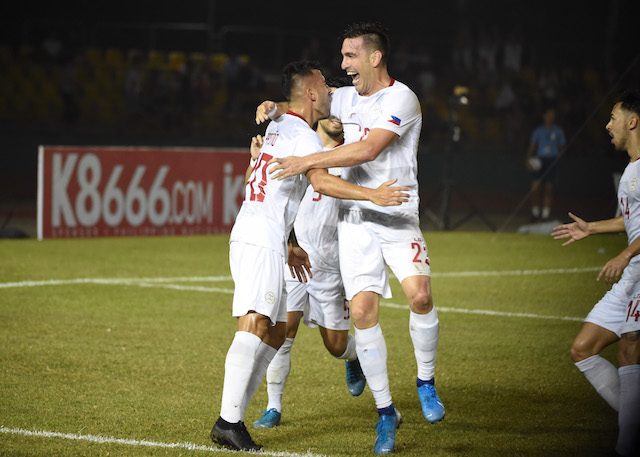 MANILA, Philippines – The Philippine Azkals scored a breakthrough win, 4-1, over Guam in the 2022 FIFA World Cup Qualifiers on Tuesday, September 9, at the GFA Centre Lower Field in Dededo, Guam.

The Azkals bounced back from their opening game loss to Syria and are now third in the Group A standings with 3 points.

Angel Guirado opened the floodgates in the 6th minute after connecting a cross from captain Stephan Schrock, 1-0.

Guirado continued to work his magic as he was part of the buildup for Patrick Reichelt, who converted a through ball to double Philippines’ lead in the 12th minute, 2-0.

In the second half, Guam responded more aggressivley, leading to a huge chance when a penalty was awarded after Azkals defender Carli de Murga brought down Travis Nicklaw inside the box.

In the 67th minute, Marcus Lopez converted from the spot to get within one, 1-2.

But the Azkals dashed away Guam’s hopes immediately as Schrock netted his first goal of the World Cup qualifiers 4 minutes later.

Midfielder John Patrick Strauss further pulled away the lead with a clinical finish in the 81st minute that capped off the match.

The Philippine national men’s football team will face China on Tuesday, October 15, at the Pana-ad Park and Stadium in Bacolod – Rappler.com