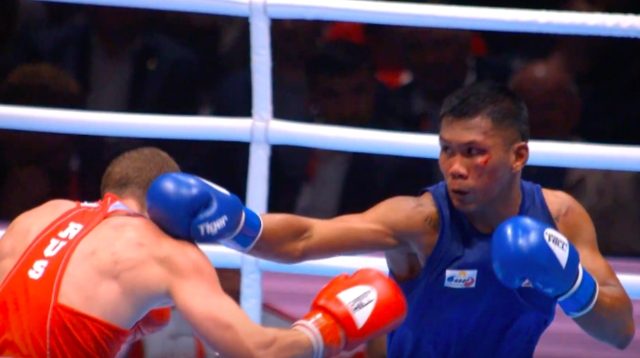 MANILA, Philippines – Eumir Marcial fell short in his bid of giving the Philippines its first gold in the AIBA World Championships.

The Filipino absorbed a unanimous decision loss to hometown bet Gleb Bakshi in their middleweight finals duel at the EXPO Arena in Ekaterinburg, Russia on Saturday, September 21.

Suffering a knockdown and a cut on his left check, Marcial was denied of the top prize as 3 judges scored it 29-28 and two had it 29-27 for Bakshi.

Marcial kept it toe-to-toe in the opening round before he was sent to the canvas with a solid left hook from Bakshi with 2:48 minutes left in the 2nd.

Determined to make up for the knockdown, Marcial remained aggressive in the 2nd and 3rd rounds, but Bakshi appeared to have landed more significant punches in the eyes of the judges.

Still, Marcial achieved a rare feat as he became only the third Filipino to win a silver in the worlds, joining Roel Velaso and Harry Tañamor.

Marcial will now turn his focus on the upcoming Southeast Asian Games, where he will try to win a third straight gold medal in front of his countrymen. – Rappler.com