Juan GDL hits game-winner in UP thriller over La Salle 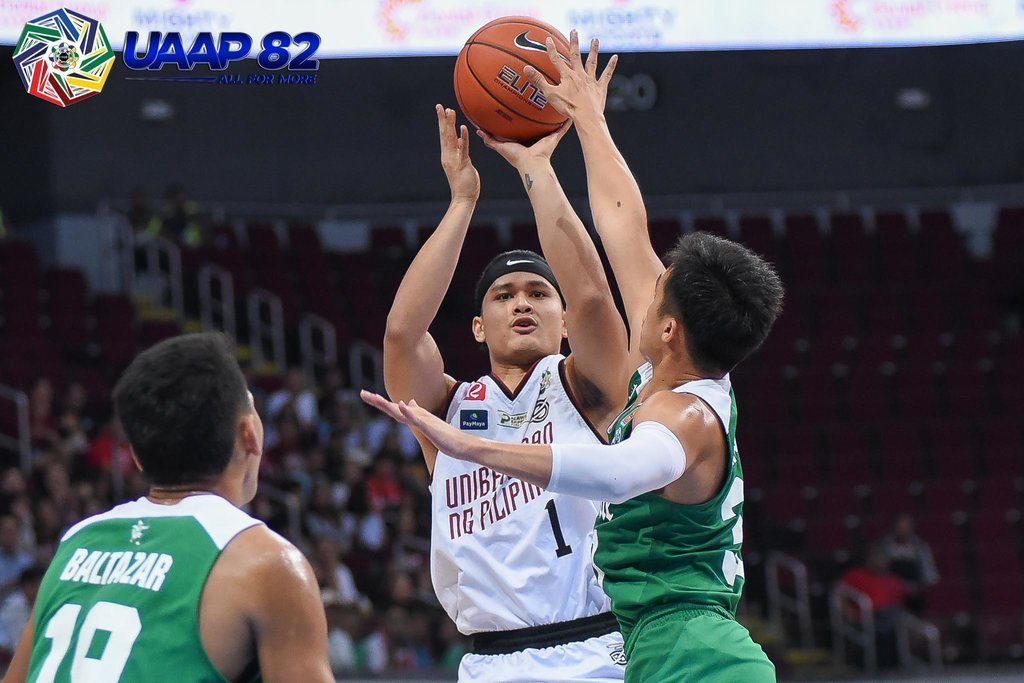 MANILA, Philippines – Juan Gomez de Liaño unleashed the game-winning triple with 7.8 seconds left as the UP Fighting Maroons rallied to steal the game from the La Salle Green Archers, 72-71, and extend their winning streak in the UAAP Season 82 men’s basketball tournament at the Mall of Asia Arena on Wednesday, September 25.

The Archers looked headed for an upset win as they held the lead in the dying seconds, 71-69, before Gomez de Liaño intercepted a long Aljun Melecio pass and pulled up for a go-ahead triple, 72-71, with just 7.8 ticks remaining.

The Archers then scrambled the ball off the timeout, which led to an Andrei Caracut shot and a Joaqui Manuel follow-up that fell short as time expired.

Kobe Paras again delivered the numbers for the Maroons with 21 points on top of two steals and two blocks, while Bright Akhuetie posted a double-double of 17 points and 14 rebounds.

Gomez de Liaño  finished with 10 points on a  2-of-3 shooting from beyond the arc.

The escape kept the Maroons at solo second with a 5-1 record while the Green Archers fell to 2-4.

“Juan is always a winner,” said UP coach Bo Perasol. “I didn’t have any doubt in my mind when he was bringing down the ball that he was going to make that shot.”

Off a 10-point deficit to start the second half, the streaky Maroons got back in the game with an equalizing 11-1 run, 40-all, capped by an Akhuetie putback at the 6:52 mark.

However, the veteran backcourt tandem of Melecio and Caracut went on a 9-0 response to bring the lead back up to 9, 49-40, exactly two minutes later.

This game of runs went on until midway through the 4th, when former star Archer Ricci Rivero brought UP within one, 65-66, off a nifty fake and layup.

Akhuetie then tied things up down low at the three-minute mark before Melecio responded with a clutch trey for a 70-67 lead.

Paras then calmly sank two free throws to put UP within a bucket, 69-71, with 1:16 left as Justine Baltazar fouled out. Akhuetie then followed suit with his fifth foul in the next possession as Jamie Malonzo muffed both freebies.

La Salle had a chance to seal the deal with the shot clock turned off, but Gomez de Liaño intercepted a long Melecio pass to win it for the Maroons.

Caracut and Melecio dropped 16 points each to pace the Archers, who had hoped to post their first back-to-back wins this season.