UP is better, but so is Ateneo 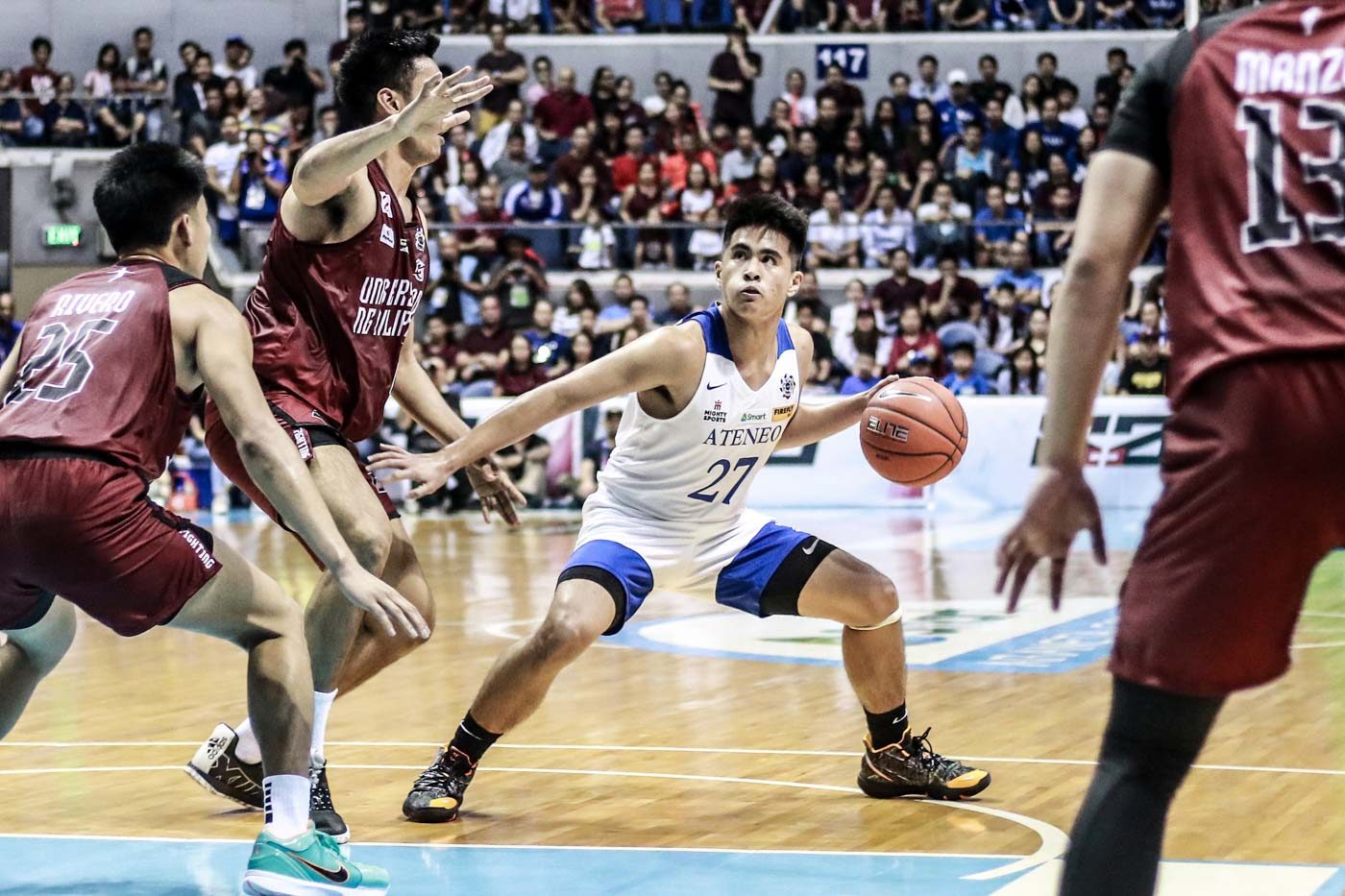 Facebook Twitter Copy URL
Copied
Now turning into one of UAAP basketball’s great rivalries, Ateneo and UP deliver the emotions, executions, and histrionics for a primetime spectacle

MANILA, Philippines – It’s fascinating how quickly the Battle of Katipunan has progressed into one of the UAAP’s great rivalries. There is both mutual respect and admiration between the two neighboring schools that carries over to the basketball court, but the duo also possesses the tapang that makes them both special programs and stories.

There was a more aggressive energy surrounding The Big Dome on Sunday for the finals rematch of the Blue Eagles and the Maroons. While waiting in queue at the packed arena Starbucks, college boys wooed their dates on the biggest event of the social calendar. Titas wearing colors of both universities said hello to friends they hadn’t seen in ages, while men and women of all generations arrived dressed for a game and a party.

And for a little while, the competition was a beautiful sight to behold.

UP was swept by Ateneo in the Finals of Season 81, and had payback on its mind reinforced by the additions of Kobe Paras and Ricci Rivero, who relentlessly attacked the unrelenting Wall of Kouame.

The battle, like it was a year ago, was a contrast of two different styles: emotional exuberance and flawless execution.

Basketball EQ vs Basketball IQ, with all the included histrionics for a primetime spectacle.

In the opening moments, Ateneo instantly displayed what makes it great. Facing the Blue Eagles is like playing a basketball video game for the first time, only the level of simulation difficulty is elevated to its highest capacity. Like wired machines, each Eagle has been trained to make the right decision, regardless of the dwindling time on the arena’s game clock.

Matt Nieto was phenomenal at the onset, bringing back glimpses of his Game 1 masterpiece against the Fighting Maroons. With already 8 points to his name, one of Ateneo’s Nieto twins had an opportunity to take a relatively free long-ball attempt following a UP miscue. It was perfectly acceptable for him to do so, given he had just hit one, and looked on his way to another scoring explosion.

He decided to set the play up. A few seconds later, Kouame scored an easy two under the rim.

William Navarro was fantastic in being Ateneo’s early utility man – the guy who cleans up misses with putbacks, uses his length to bother the opposition, and finds a way to remain a threat whenever he’s on the floor.

On the other side, Jun Manzo attacked the interior defense of Kouame the smartest way possible: by taking and making mid-range floaters.

On top of that, the Cebuano was also the steadying force that allowed UP to stay within striking distance early. His energy on defense catapulted the entire Maroons to guard on their toes, and his persistence to make sure the ball was moving around on the other end inspired unselfishness which was contagious.

When Juan Gomez de Liaño entered the contest, he moved like a man who had his confidence back following the game-winner against La Salle. More importantly, he took over where Jun left off by being the de facto point guard who set up the likes of Rivero, and fearlessly attacked Ateneo’s stingy defense when he saw opportunities. The result was a 6-point UP lead which had Iskos high-fiving with strangers in the stands.

As the Maroons foray into an unpredictable second round, how much of last year’s Juan can return will be the ultimate wildcard.

It has become pretty clear what the roles of Bright, Javi, Jun, and Kobe are. Where Ricci and Juan fit into the puzzle remains perplexing, but it’s also one of the suddenly many problems for Bo Perasol, who faces suspension.

The 2nd quarter was the genesis of destruction. Unfazed, the Ateneo crowd looked patient while the UP faithful roared to their team’s early attack. Like their fans, the Blue Eagles seemed unperturbed and the proof of that was in how they used the Fighting Maroons’ own energy against them.

As the referees started to make a chorus with their whistles, Tab Baldwin instructed his boys to stay true to their system, even if State U had rattled them a little shaky.

When Ateneo rediscovered its offense, it was UP that first folded against pressure.

Rivero scored easy early baskets by moving off-ball and finding open seams, but once he resumed his isolation show, the Eagles forced stops to put Thirdy Ravena in the position to convert athletic baskets on the break.

In one possession that felt like it lasted forever, Kouame had a serving of unlimited offensive rebounds, which was demoralizing not only to an exhausted UP defense but also to an anxious UP crowd.

The Ateneo side grew louder.

By the 3rd quarter, the dam gates opened. Nieto hit jumpers, Kouame scored inside, Ravena did his thing, and the rim looked as wide as the Red Sea for the Blue Eagles, who outrebounded UP, 49-32.

Bright Akhuetie was called for a technical foul – his fourth personal of a game where State U was already down double digits. A few minutes later, Perasol charged at official Jaime Rivano, which consequently led to the ejection of the Fighting Maroons’ emotional anchor.

“It really doesn’t matter what happens on the court, but I have to think about my composure because that is what I preach,” Perasol told beat reporters post-game.

“There was an instance that when the official called the third foul on Bright and Bright was already at the other baseline, I really thought that the official followed him there. And for me, I was telling him, ‘You’re going to ruin the team, or you’re going to ruin the competition, a beautiful competition at that, by making personal calls like that,’” he also shared.

In the middle of the 3rd period, the game’s physicality and the fight against the refs became the themes of what was supposed to be an epic encounter of the UAAP’s league leaders.

The animosity spilled over to the upper and lower boxes, where at one point UP fans asked a standing Ateneo supporter to sit for a better vantage point of the game. He refused, countering that since they had the higher ground, they just needed to adjust their positioning. Over the next few minutes, both sides heckled at each other back and forth, while others threw sideward glances.

Back on the court, the competition turned one-sided. Ateneo built its lead in precise fashion. UP managed defensive stops, but their high-octane attack hurt as much as it helped them thanks to costly turnovers.

Some Maroons attacked the paint with force, but found their attempts ending in misses more than makes. In other times, the referees swallowed their whistles.

Very little, if not no one, from the UP community will feel angst towards Perasol, who’s a father figure to the Maroons, and one of the most responsible men for turning the UP seniors basketball program from disaster to success.

But it’s also clear that without him, the UPMBT is without its most guiding voice during this season of heightened expectations.

The UP Fighting Maroons are better. Last year’s team was special, but this has more overall talent. That means the room for them to grow is present.

Paras has the talent of a one-man wrecking crew, and has been a better leader than anticipated. For now, Ateneo is able to contain him, if he can get more acclimated to the UAAP game, he can elevate UP more than anyone.

The question is, can the Maroons of 82 fight through the extracurriculars that throw them off their game, just like last year’s team did? Or will they succumb to the pressure under the brighter lights?

“There were a lot of emotions in the game and we tried to keep the emotion out of it, for the most part,” said Tab Baldwin.

UAAP officiating has been a controversial topic for years, and every time the referees’ inconsistency rears its ugly head, it seems to take the spotlight. Will it change? One can only hope. Until then, the Maroons can’t afford to take on 3 more figures on the court.

For the entirety of the second half, the Ateneo crowd grew more and more in love with the young Eagles. Navarro (season-high 14 points) dizzied the UP defense with his quick-decision making and ability to score at the rim, while SJ Belangel (career-high 11 points) confidently knocked down rainbow-arching jumper after another. Ravena, who at this point is a PBA pro in a college uniform, has taken a bit of a step-back as Baldwin gives more shine to the young blood.

Thirdy had his moment last season, and before he leaves the school that put its faith in him, he’s giving back by passing on Ateneo’s winning tradition. When Navarro scored on a tough basket in the 4th, his senior teammate flexed his toned arm from the bench in support.

And that is what makes Ateneo more lethal. The Eagles were dominant on their way to a repeat last season, losing only two games, and look even better this year with the improvement of their young guys. The graduating veterans are still around, prepared to take the reins when it’s crunch time, and the towering presence of the Ivorian Kouame looms bigger than ever.

Anything can happen, but because of its dominance, the UAAP has become a race to chase Ateneo.

NU and UE are at the bottom, rebuilding teams bidding their time.

La Salle, FEU, and Adamson are in the middle, still figuring out where their paths lie.

UP and UST are closer than the rest.

And above them all, Eagles soar high. – Rappler.com