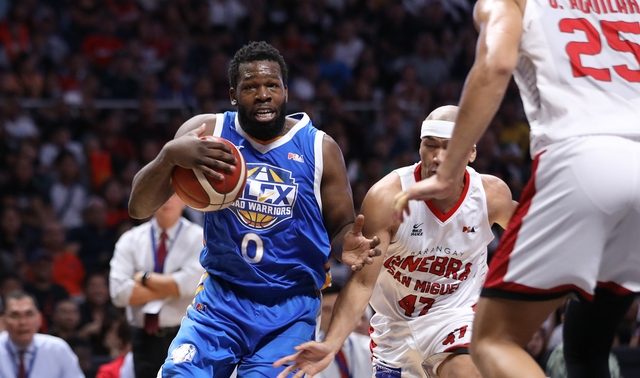 MANILA, Philippines – NLEX stormed back from 28 points down to shock Barangay Ginebra in a thrilling 113-111 overtime win in the 2019 PBA Governors’ Cup in Dubai on Saturday, October 5 (Sunday, October 6, Philippine time).

Fans who trooped to the Coca-Cola Arena got more than what they paid for as the Road Warriors forged an extra period and banked on triples from Philip Paniamogan and Jericho Cruz to clinch their fourth win in 5 games.

The Gin Kings held a 111-107 lead behind a pair of LA Tenorio triples with less than two minutes remaining before Paniamogan – who delivered 20 points – hit his sixth triple of the match to put his side within a whisker.

Kiefer Ravena then secured the rebound off a Justin Brownlee miss then assisted Cruz for the go-ahead triple that settled the score as Barangay Ginebra muffed its last 3 chances of either forcing a second overtime or winning.

Japeth Aguilar missed a jumper, Tenorio saw his three-pointer clank off the rim, while Stanley Pringle failed to sink his a jump shot with 4 ticks left.

Ravena had 13 points, 17 assists, and 7 rebounds, and most importantly, drained the three-pointer to send the game to an extra period, 103-103.

With the Road Warriors fresh from a 94-98 loss to San Miguel a day ago, the rigors of playing back-to-back games seemed to have taken their toll on them as they got buried 44-72 early in the 3rd quarter.

But NLEX sliced that deficit in half heading into the final frame, 72-86, before eventually tying the game at 100-100 thanks to back-to-back Paniamogan and Erram three-pointers with 38 seconds left in regulation.

Aguilar and Brownlee put the Gin Kings up by 3 after going 3-of-4 at the line, but Ravena came to the rescue and shrugged off a pesky defense from Tenorio to knock down the game-tying trey at the buzzer.

NLEX sank 17 triples for the biggest comeback win since San Miguel erased a 29-point deficit and toppled Rain or Shine in Game 2 of their Commissioner’s Cup semifinals clash in July.

Brownlee churned out a monster triple-double of 42 points, 20 rebounds, 10 assists, and 4 blocks, but all that went down the drain as Barangay Ginebra absorbed its second straight loss for a 1-2 record.