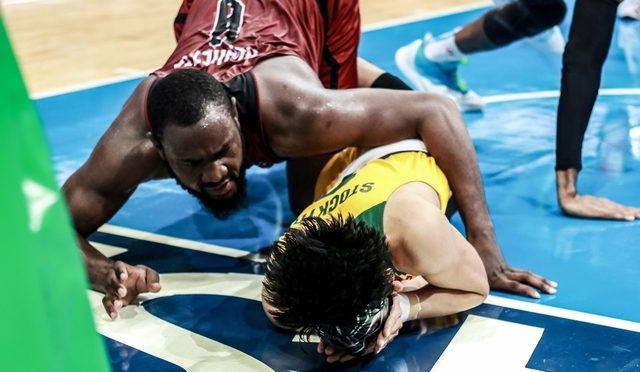 Facebook Twitter Copy URL
Copied
Tempers flare as Alec Stockton falls on Bright Akhuetie, who then delivers a hit in the mouth

MANILA, Philippines – The UAAP Season 82 second-round match between the FEU Tamaraws and the UP Fighting Maroons was nothing short of drama-filled.

What was supposed to be a light jog to the finish line for the Tamaraws turned to be an all-out sprint as the Maroons stormed back from a 16-point fourth-quarter deficit to send the game to overtime.

FEU, however, escaped with a nail-biting 82-79 win for a share of 3rd place in the standings.

As such, passions were inevitably high late in the game, and one Twitter user caught a mad scramble on camera.

Spot the not……. #UAAP82 pic.twitter.com/cIYoj2Fmz8

As reigning MVP Bright Akhuetie hustled for the offensive rebound off a Ricci Rivero miss with a minute left in regulation, he ended up tripping and falling on FEU big man Pat Tchuente.

With the referee not whistling for out of bounds, Akhuetie flung the ball to a waiting Ken Tuffin just as Alec Stockton dove on top of UP’s Nigerian bruiser.

Akhuetie then looked at Stockton and hit him in the mouth before getting back up on defense. Moments later, the referees called for a mandatory substitution as Stockton had a bloodied lip.

Stockton has had a history of tussles with UP players like Rivero back in the UAAP 3×3 preseason tournament, while Akhuetie is no stranger to losing his cool on the hardwood.

League commissioner Jensen Ilagan has not replied to Rappler’s request for comment as of posting.

If a league investigation pushes through, suspensions may be handed out to concerned parties even if no call was made on the floor at the time of the game.

Such was the case last season as the league suspended Ateneo star Thirdy Ravena for one game after a post-game review revealed that he hit former UP captain Paul Desiderio.

This ultimately resulted in Ravena’s disqualification from contending for individual awards such as the Mythical Five and the MVP, which were eventually both won by Akhuetie that same year. – Rappler.com