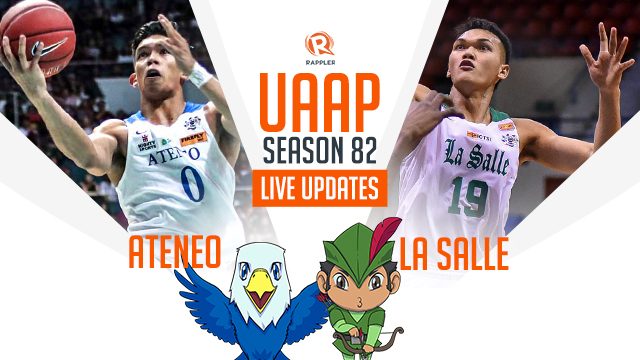 Facebook Twitter Copy URL
Copied
Sparks fly whenever these two rivals meet, so this weekend's showdown between the Ateneo Blue Eagles and the La Salle Green Archers will certainly be no exception

MANILA, Philippines – UAAP fans will get an early treat on Sunday, October 13, as the Ateneo Blue Eagles figure in a noontime rivalry showdown with the La Salle Green Archers at the Mall of Asia Arena.

Unlike their first round matchup, all the mystery surrounding the retooled Archers is gone, which bodes well for both sides.

As both Keys Meeker and James Laput failed to pan out so far for the 4-4 La Salle, Jamie Malonzo has emerged as a legitimate Mythical Five candidate, and without question, the best recruit from the one-and-done trio.

Meanwhile, last season’s Mythical Team selection Justine Baltazar has come alive to start the second round after an eye-popping 25-point, 25-rebound eruption in the Archers’ win against the NU Bulldogs.

Not to be outdone by their elite frontcourt duo, the veteran backcourt tandem of Andrei Caracut and Aljun Melecio have also been nothing short of dependable. Caracut currently leads the UAAP in assists per game with 4.6 dimes a night while Melecio is not far behind at 3.1, good for 8th in the league.

As balanced as La Salle has become, however, nothing still beats the talent parity of the undefeated Eagles, who are coming off an 80-74 squeaker against the Adamson Soaring Falcons.

To prove that point, two-time Finals MVP Thirdy Ravena scored a season-high 23 points against Adamson, marking the very first time this season that an Ateneo player reached the 20-point mark. Not even MVP candidate Ange Kouame has scored that many, nor did he need to as the Eagles are currently unscathed at 9-0.

That’s mainly because underrated stalwarts like Will Navarro, Gian Mamuyac and SJ Belangel continue to wreak havoc on both ends, helping Ateneo hold opponents to a league-low 60.4 points per game.

To put that in perspective, the FEU Tamaraws,  the second-best defensive team, are almost 9 points behind at 69.1 points allowed while the UE Red Warriors allow the most marks at 83.2.

As always, sparks fly whenever these two rivals meet and Sunday noon will certainly be no exception.