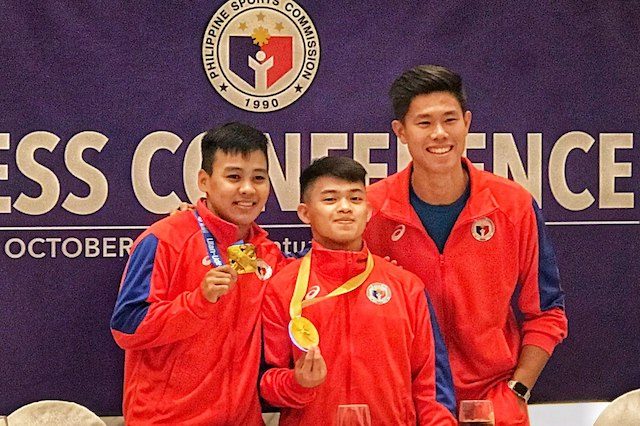 MANILA, Philippines – With 45 days to go before the country hosts the 2019 Southeast Asian Games, the Philippines celebrated the achievements of Nesthy Petecio, Carlos Yulo and EJ Obiena, who all recently raised the country’s colors in the world stage.

But pole vaulter Obiena, who was the first Filipino to qualify for the 2020 Tokyo Olympics, sympathized with the stories shared by his fellow national athletes during the press conference hosted by the Philippine Sports Commission on Tuesday evening, October 15.

The 24-year-old athletics star admitted that being a national athlete of the Philippines is difficult, yet rewarding at the same time.

“I think everybody here knows that we lost a lot of times before we actually won and part of our life is challenges, everyday struggles, and just a series of good memories that make us who we are now,” said Obiena, who made a grand comeback from an ACL tear in 2017.

“We’re very lucky to have the Philippines as the country we represent. Sometimes I compete and I’m the only Filipino there in the stadium then I see a tiny flag waving and it’s just nice and that kind of makes me happy and makes me feel lucky that I get to show the world that there is a Filipino vaulting here and we actually exist.”

But things also didn’t come easy for them.

Petecio, who has been boxing for 20 years, shared that she almost gave up on the sport especially after she controversially lost 2-3 in the opening bout of her 2018 Asian Games campaign, making her doubt herself.

Yulo, who nailed a 2020 Tokyo Olympics berth and became the first Filipino gymnastics world champion in the process, also told the story of his beginnings in the sport and the trials he had to go through in training for 3 years in Tokyo, Japan.

Now that they’re relishing the fruits of their patience and hard work, however, the three champions intend to sustain their top form. And up next for the trio is the 30th Southeast Asian Games – which the Philippines will host from November 30 to December 11 – where Petecio, Yulo and Obiena vow not settle for anything less than a gold medal. – Rappler.com