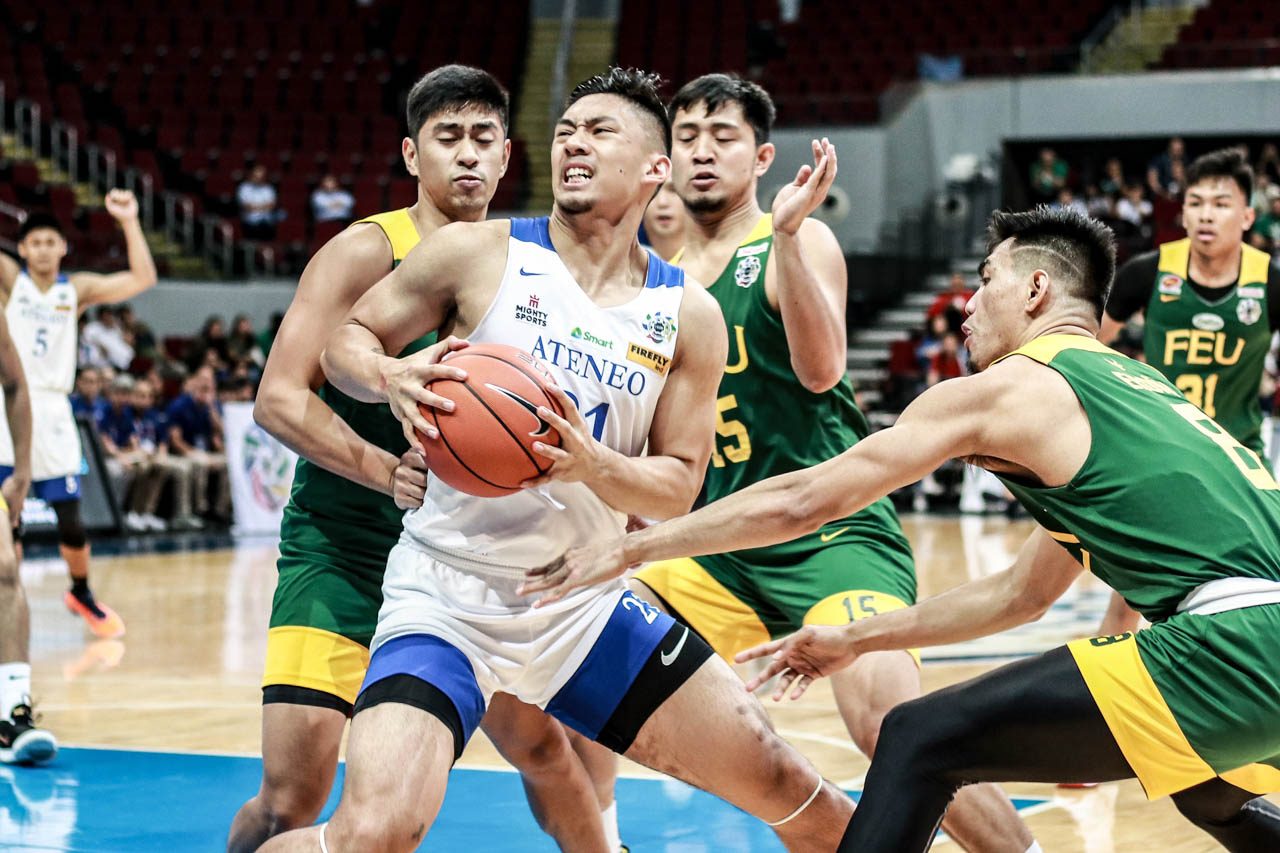 Facebook Twitter Copy URL
Copied
Ateneo gets flustered by a driven FEU squad, but the unbeaten Blue Eagles regain their bearings to complete a come-from-behind win

MANILA, Philippines – Down by double-digits for the first time this season, the Ateneo Blue Eagles clamped down on the FEU Tamaraws in the second half to take a 65-55 win in the UAAP Season 82 men’s basketball tournament at the Mall of Asia Arena on Wednesday, October 16.

The defending champion Blue Eagles – already assured of a twice-to-beat advantage in the Final Four – kept their poise in the final stretch behind Thirdy Ravena and Ange Kouame to stay on track of sweeping the season as they rose to 11-0.

Meanwhile, the Tamaraws suffered a crucial blow to their playoff campaign as they fell to 5th place with a 5-6 record.

“FEU certainly gave us a wakeup call in the first half that we needed,” said coach Tab Baldwin as his  Blue Eagles trailed by as many as 13 points, 42-29, early in the 3rd frame.

Kouame buried 10 points and pulled down 15 rebounds, 12 coming on the offensive end, while also tallying 4 blocks.

Ravena also dropped a double-double of 10 points and 10 rebounds, while Pat Maagdenberg fired a career-high 9 points and 4 boards.

Much like how they ended their win against UST, FEU waxed hot in the first half with streaky perimeter shooting. The Tamaraws eventually capped off the 2nd quarter with a buzzer-beating Rey Bienes triple for an 11-point lead, 40-29.

However, Ateneo’s championship poise again showed in the second half as they limited FEU to just 7 points to inch the gap within one, 46-47, entering the 4th.

After a go-ahead Pat Maagdenberg layup to begin the final frame, the Eagles then pushed the lead to 7 points, 54-47, off three Adrian Wong free throws at the seven-minute mark.

Just as FEU was getting within striking distance, 55-57, after an Ino Comboy three, Will Navarro and Kouame conspired for 7 straight points to suddenly put the game away, 64-55, with 1:29 left to spare.