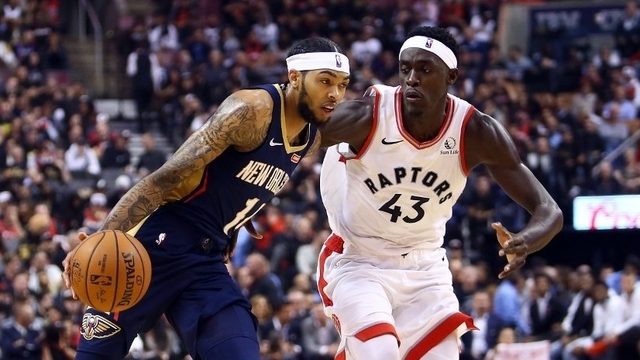 MANILA, Philippines – The Toronto Raptors kicked off their title-retention bid in the NBA with a rousing 130-122 overtime win over the New Orleans Pelicans on Tuesday, October 22 (Wednesday, October 23, Philippine time).

Moving on from the departure of Kawhi Leonard to the Los Angeles Clippers, defending NBA champions the Raptors proved well-capable of winning in the game that marked the return of the NBA.

Pascal Siakam – who was given a four-year, $130 million extension by the Raptors – showed he was worth every penny after dazzling with 34 points, 18 rebounds, and 5 assists at their home court Scotiabank Arena.

The fourth-year forward Siakam became the only other player in NBA history to have a 34-18-5 statline during a regular season opener, joining Charles Barkley who pulled off the feat in 1993.

One of the heroes in their title run last season, Fred VanVleet also came up big against the up-and-coming Pelicans with 34 points, 7 assists, 5 rebounds, and 2 steals, while Kyle Lowry chalked up 22 points, 6 assists, and 2 steals.

The two guards delivered down the stretch by conspiring for the win-clinching 8-0 run that broke a 122-122 deadlock, with VanVleet and Lowry knocking down back-to-back triples in the final two minutes.

Serge Ibaka finished with 13 points and 5 rebounds in the win as OG Anunoby added 11 points and 7 rebounds.

“We had to reach into our bag of tricks,” said Raptors coach Nick Nurse.

Brandon Ingram paced the Pelicans with 22 points, 5 rebounds, and 5 assists, JJ Redick had 16 points, while Josh Hart put up 15 points and 10 rebounds.

The Pelicans missed the services of top draft pick Zion Williamson, who is expected to miss up to two months after undergoing arthroscopic surgery on his right knee.

Prior to the tipoff against the Pelicans, the Raptors presented their players and coaches with their rings and unveiled the 2019 championship banner in the rafters of the arena.

The massive ring features over 80 diamonds, including 74 in and around the Toronto skyline logo which represents the Raptors’ 74 wins last season.

Coach Alvin Gentry and the Pelicans decided to remain on the floor during the pre-game festivities instead of loosening up in their locker room.

“It was great to see the ceremony,” said Gentry. “That is what we aspire to be.” – with reports from Agence France-Presse/Rappler.com