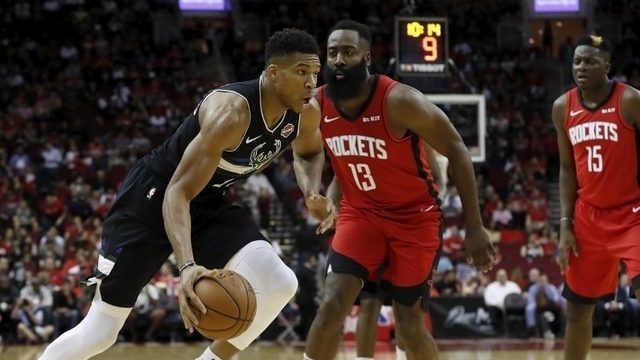 MANILA, Philippines – The Milwaukee Bucks gave the new-look Houston Rockets a dose of reality after eking out a 117-111 win in their NBA season-opener on Thursday, October 24 (Friday, October 25, Philippine time).

Reigning Most Valuable Player Giannis Antetokounmpo picked up where he left off from last season with 30 points, 13 rebounds, and 11 assists to help the Bucks deny Russell Westbrook a winning debut for the Rockets.

That, along with 6 other players breaching double figures in scoring, proved to be the difference as the Bucks started its title bid on the right foot.

With reigning champions Toronto Raptors losing Kawhi Leonard to the Los Angeles Clippers in the offseason, the road to the finals has become wide-open in the Eastern Conference.

Wesley Matthews finished with 14 points and 4 rebounds, while Ersan Ilyasova chalked up 13 points and 11 rebounds, including the jumper with less than 20 seconds remaining that sealed the win for the Bucks.

Khris Middleton, Brook Lopez, and Eric Bledsoe each had 11 points in the win as Kyle Korver added 10 points.

“Even though we faced adversity and we weren’t playing our best basketball in the first quarter and second quarter we came out, we were focused. We were able to move the ball and execute,” Antetokounmpo said.

Antetokounmpo became the first player since Oscar Robertson in 1966 to post a 30-plus point triple-double in his opening game of a season.

Westbrook wound up with his usual numbers of 24 points, 16 rebounds, 7 assists, and 2 steals for his new team, but had a rough shooting performance together with running mate James Harden.

The duo shot a combined 9-of-30 clip, although Harden still delivered 19 points, 14 assists, and 7 rebounds in the loss. – Rappler.com