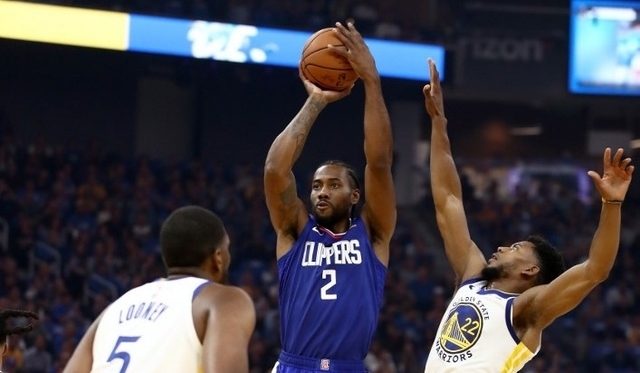 Kawhi Leonard, Lou Williams, and Patrick Patterson all breached the 20-point mark as the Clippers dominated the match that seemed like a changing of the guard in the stacked Western Conference.

The Warriors reached the NBA Finals in the last 5 seasons, but were obviously reeling from the loss of Kevin Durant to the Brooklyn Nets, Andre Iguodala to the Memphis Grizzlies, and Shaun Livingston to retirement.

Also, the Warriors missed the services of Klay Thompson, who is expected to miss the entire season as he recuperates from a knee injury.

Making a statement by beating the Los Angeles Lakers in their season-opener, the Clippers pounced on the Warriors’ mishaps, seizing a 65-54 halftime lead and never looked back.  (READ: Kawhi, Clippers deny Lakers in glitzy Battle of LA)

Leonard finished with 21 points, 9 assists, and 5 rebounds, Lou Williams topscored with 22 points and 8 assists, while Patterson delivered 20 points for the Clippers, who improved to 2-0.

Also making their presence felt in the win were Montrezl Harrell, who put up 18 points, 6 rebounds, and 3 assists, Ivica Zubac, who had 16 points and 10 rebounds, and Mo Harkless, who added 10 points.

Steph Curry paced the Warriors with 23 points, 4 rebounds, and 4 assists, but their season debut at the newly opened Chase Center did not go as planned after allowing the Clippers to shoot a stellar 62.5% from the field.

New acquisition D’Angelo Russell, who led the Nets to the playoffs last season, showed up in his Warriors debut with 20 points and 8 assists. – Rappler.com