Harris triple-double propels NLEX to share of No. 1 spot with TNT 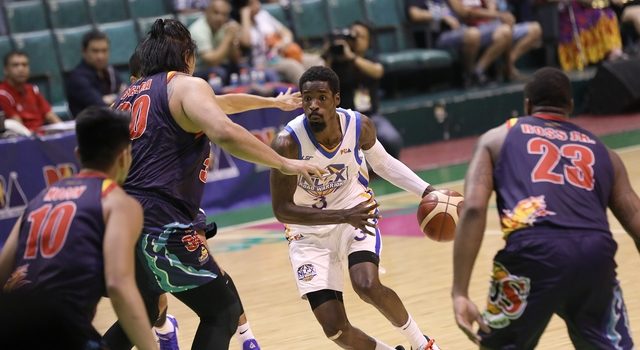 Facebook Twitter Copy URL
Copied
Manny Harris falls short of the 40-point mark for the first time in 3 games, but comes out just as impressive as NLEX blows out Rain or Shine

MANILA, Philippines – NLEX rolled on to its fourth straight win with a 111-91 conquest of Rain or Shine and gained a share of the lead in the 2019 PBA Governors’ Cup at the Cuneta Astrodome on Wednesday, October 30.

Import Manny Harris did not breach the 40-point mark for the first time in 3 games, but was just as impressive with a triple-double as the Road Warriors bucked off a lethargic start to nail their seventh win in 8 games.

NLEX tied sister team TNT at the top of the standings.

Harris finished with 29 points, 12 rebounds, and 11 assists, while 5 others wound up in double figures in scoring in the win that saw their side outscore the Elasto Painters, 60-42, in the second half en route to the blowout.

Behind new import Rich Ross, Rain or Shine led by as many as 12 points, 25-13, before Harris and his local teammates engineered a 10-2 run to end the opening quarter trailing by only 4.

The Road Warriors carried that momentum in the next 3 quarters, wrapping up the first half ahead, 51-49, and enjoying a lead as many as 23 points, 108-85, late in the payoff period.

Also making their presence felt for NLEX were Raul Soyud and JR Quinahan, who chipped in 10 points apiece and conjoined for 13 rebounds.

Ross, who replaced injured Kwame Alexander, had a decent PBA debut with 20 points, 8 rebounds, and 4 assists, but the Elasto Painters still could not catch a break as they slipped to the bottom of the standings at 2-7.

Javee Mocon had 17 points and 8 rebounds, while Jewel Ponferada and Kris Rosales added 13 and 10 points, respectively, in the loss.