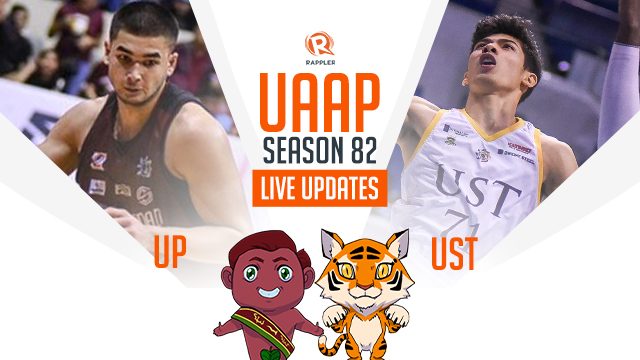 Facebook Twitter Copy URL
Copied
As the UP Fighting Maroons try to sneak their way back to the UAAP Finals, the UST Growling Tigers look to prove they're too good to stop

MANILA, Philippines – Just one win separates the UP Fighting Maroons from their return to the UAAP Finals, but that win just got farther away from their grasp.

That’s because the UST Growling Tigers rained on the Maroons’ parade with a torrent of threes last Sunday, November 10, to the tune of an 89-69 blowout.

Just like that, UP’s twice-to-beat advantage has been neutralized and both squads now head to their final bout on Wednesday, November 13, on a level playing field.

Maroon stars Kobe Paras and Ricci Rivero were both left at a loss for words following the Game 1 loss, with the latter venting out his frustrations on an LED board that injured his shooting hand.

While former MVP Bright Akhuetie and Season 81 Mythical Five member Juan Gomez de Liaño are now in top form, they are just two parts of a puzzle the Maroons are running out of time to solve.

Heading to Wednesday afternoon, the Tigers already lead their head-to-head series, 3-0, with an average winning margin of 14 points.

Chabi Yo, Abando, Rookie of the Year Mark Nonoy and streaky veteran Renzo Subido will surely make it a point that momentum remains on their side.

However, UP head coach Bo Perasol may just have one last ace up his sleeve, as he previously declared that he’ll put his job on the line if his team doesn’t win it all.

Perched on top of the food chain, the Ateneo Blue Eagles eagerly await the next challenger to their throne. Are the Maroons set to do what they do best and sneak their way back up or are the Tigers just too good to stop now?

The showdown tips off at 4 pm at the Mall of Asia Arena. Follow Rappler’s live blog for updates:

UAAP82: UP vs UST 2.0 – Curated tweets by RapplerSports