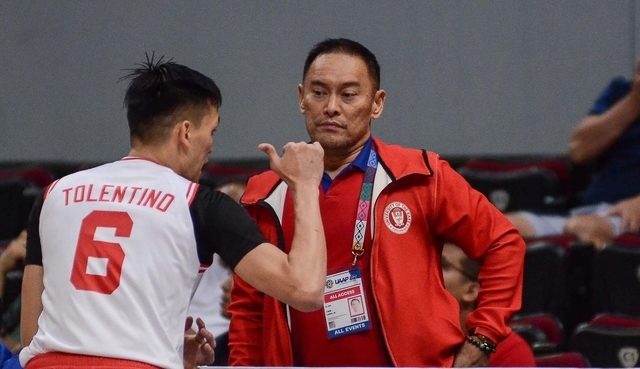 Facebook Twitter Copy URL
Copied
Prior to his death at just 53 years old, Bong Tan called the shots for UE alongside Lawrence Chongson, guiding the Red Warriors to a 4-10 record in Season 82

“He was such a great boss. Very kind-hearted, very friendly and approachable. Very driven and very determined to make UE better,” said former UE coach Joe Silva. “But most of all, the advice that he gave me will forever be ingrained in me.”

He added: “But beyond being my boss, he was an even better person. Very generous, passionate about sports. Even after I left, he treated me the same way. I have nothing but respect for Boss Bong. No wonder he is loved by many.”

Prior to his death at just 53 years old, Tan called the shots for UE – the school owned by his father, tycoon Lucio Tan – with active consultant Lawrence Chongson after Silva’s resignation.

Together, they guided the Red Warriors to a 4-10 record for 7th-place finish in the UAAP Season 82, an improvement from a one-win campaign the previous year.

“As a coach he was very passionate about winning and doing things the right way,” Silva said. “He empowered his players and taught them about life as well.”

Other sports personalities also expressed their thoughts and condolences on social media.

Sad day for . We were together 12 years ago with Burger king in the now defunct PBL. #RIPBongTan @Official_UE https://t.co/7EP1WBl9a5

RIP to Ahya Bong Tan. He was a good friend to us and helped and took care of a lot of people. He will be missed. Still so shocked. Life is short

Prayers and condolences to the entire Tan family… #RIPBongTan https://t.co/nD5GNzjwx5

Our deepest condolences to the Tan family for the passing of Lucio ‘Bong’ Tan Jr.
We, @alabpilipinas send our prayers to the entire family.@tanduayrhumph tanduayathletics @flypal https://t.co/eOo02Vujgc

What a shocking and sad day. Rest in peace Ahya Bong Tan. Thank you for being a good friend and big brother to me. I’ve never met anyone so in love with basketball and competitive like you! We will miss you
taken Oct 27, 2019 pic.twitter.com/4Y1VKhpRTx

Sad news…prayers sent to the family and friends of Bong Tan  https://t.co/q9j2Y5bNHX

While Tan’s team struggled in the collegiate ranks, he had massive success in the semi-professional level as his Stag Pale Pilseners, which later carried the name Tanduay Gold Rhum, won 7 titles in the Philippine Basketball League (PBL) from 1995 to 1998.

In 1999, Tanduay joined the Philippine Basketball Association, where it played for 3 seasons before FedEx Express took over the franchise. – Rappler.com