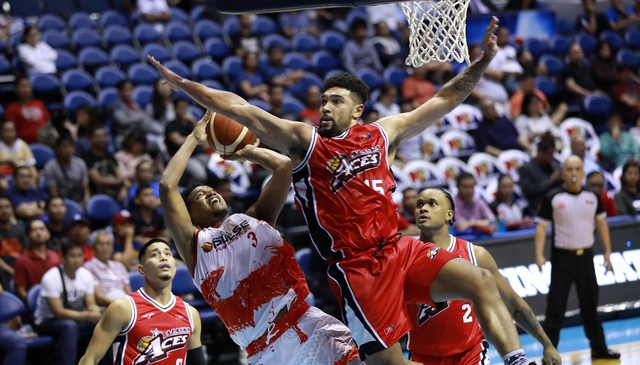 MANILA, Philippines – Alaska gave Phoenix the boot and bolstered its hunt for a playoff berth in the 2019 PBA Governors’ Cup with a valiant 105-102 win at the Araneta Coliseum on Wednesday, November 13.

Led by Vic Manuel, who came off the bench with 20 points, the Aces held on to pick up their third straight win and fourth overall in 10 games despite nearly squandering a double-digit lead in the last 3 minutes.

Jeron Teng finished with 17 points, 8 rebounds, and 4 assists, import Franko House had 15 points, 18 rebounds, and 2 blocks, while Maverick Ahanmisi wound up with 12 points for Alaska.

The Aces were comfortably ahead 103-90 off a Manuel bucket with 2:46 minutes remaining before the Fuel Masters trimmed their deficit to a whisker with a 12-0 run – capped with a booming Matthew Wright triple.

JVee Casio, though, restored order for Alaska by sinking his two foul shots to give his side a three-point lead as Jayson Perkins missed the potential game-tying three-pointer with a second left for Phoenix.

Kevin Racal chipped in 11 points in the win, Casio and Simon Enciso each had 9 points and combined for 10 assists, while Abu Tratter added 7 points.

The win marked the debut of Rodney Brondial and Robbie Herndon, who were traded from Magnolia, for Alaska, which forced a three-way tie with NorthPort and Columbian for the last two quarterfinals spots.

Wright put up 25 points, 10 assists, 4 rebounds, and 2 steals, but his all-around performance was not enough as the Fuel Masters dropped out of playoff contention with a 2-8 record.

Regardless of the result of its last elimination round game, Phoenix will still head into an early vacation, joining also-ran Blackwater,