Nov 19, 2019 5:35 PM PHT
JR Isaga
Facebook Twitter Copy URL
Copied
Poised to leave like legends, the Ateneo Blue Eagles go for a perfect season against a UST Growling Tigers side vying to pull off the improbable 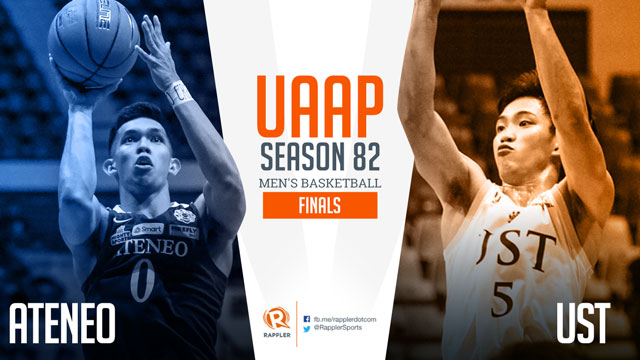 MANILA, Philippines – “Not working makes you rusty. And we worked. We worked hard.”

After a 16-day layoff, the Tab Baldwin-coached squad played like they never stopped and demoralized the streaking UST Growling Tigers with a 91-77 blowout win.

Thirdy Ravena turned on his Finals MVP mode and erupted for 32 points on a 14-of-18 shooting as Aldin Ayo’s boys found no answer outside Rookie of the Year Mark Nonoy, who responded with a career-best 26 markers.

Then again, in hindsight, nothing lower than its best effort could be expected from a team on the cusp of a historic 16-0 sweep.

If the Eagles do complete their three-peat title bid in Game 2 on Wednesday, November 20, they would be the first team since – interestingly enough – UST in Season 56 to complete a perfect season.

However, Ayo’s teams also have a penchant for pulling off the improbable, which is something Ateneo is surely wary of.

Apart from Nonoy, UST’s guard rotation is also manned by the graduating Renzo Subido, who’s obviously looking to end his collegiate career on a high note.

Then there’s the reigning MVP Soulemane Chabi Yo, who at his worst day can still pull off a double-double performance like its nothing.

And of course, rising star Rhenz Abando is surely seething after a career-worst three-point outing in Game 1 and now has redemption in his sights.

But all that burning fire can easily be doused by the cold, merciless dominance of Baldwin’s system that boasts, possibly for the last time, a seniors squad of Ravena, Isaac Go, Adrian Wong and the Nieto twins Matt and Mike.

If they had their way, they would want nothing more than to etch their names in history and leave like legends.

Will Ateneo complete the job cleanly and coast to a three-peat or will UST play spoiler for the sake of their season?

The blockbuster showdown kicks off at 4 pm at the Mall of Asia Arena. Follow Rappler’s live blog for updates: