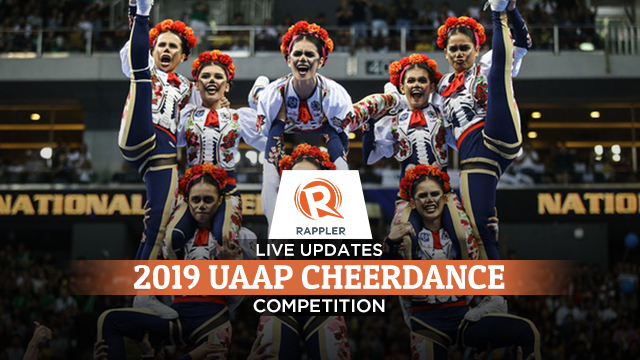 MANILA, Philippines – It’s once again time for tosses and tumbles to turn heads and leave mouths open as the UAAP Season 82 Cheerdance Competition kicks off on Sunday, November 17, at the Mall of Asia Arena.

Just like in the last 6 years, the NU Pep Squad once again has a sizable target on its back as the frontrunner to restart a fallen dynasty with a back-to-back title bid. (WATCH: UAAP Cheerdance 2019 teasers and cheer tutorials)

Led by multi-titled coach Ghicka Bernabe, the Sampaloc-based stunt dancers have improved by leaps and bounds as proven by their four-peat title run from 2013 to 2016.

After again copping the top prize last year with a flawless Day of the Dead-themed routine, no less than another title is expected from the league’s undisputed barometer of skill and innovation. (LOOK: UAAP Season 82 Cheerdance order of performance)

However, still in the running for a top podium finish is the Adamson Pep Squad, which stunned NU in 2017 by winning its first-ever CDC gold medal in school history.

After winning over crowds and judges with a charismatic 1980s Pinoy disco dance medley two years ago, the lovable underdogs from San Marcelino continued their current podium run with a second-runner up finish last season and are still expected to make major noise this time around.

Not to be outdone are the UST Salinggawi Dance Troupe and the FEU Cheering Squad, both legitimate championship contenders ever since the contest’s inception.

Both tied with 17 podium finishes apiece – but with UST owning a league-best 8 gold medals – their own histories are their best indicators that they’re never ready to bow out quietly year in and year out.

Lastly, a UAAP CDC won’t be complete without taking the eight-time champion UP Pep Squad into contending consideration.

Even though the UP cheerleaders have lost steam with back-to-back sixth-place finishes after their controversial 2016 sit-out, the cheerdance conquerors from Katipunan are still under the same program that produced a league-best 20 podium finishes.

And with their last medal coming 4 years ago – an eternity by UP’s standards – expect them to compete with an ever-growing fire and a mind for vengeance.

NU remains at the top of the league pyramid for now, but come Sunday afternoon, it will be a toss-up, literally and figuratively.

Who will reign supreme in the league’s biggest stage for dance and daring stunts? Tune in to find out.