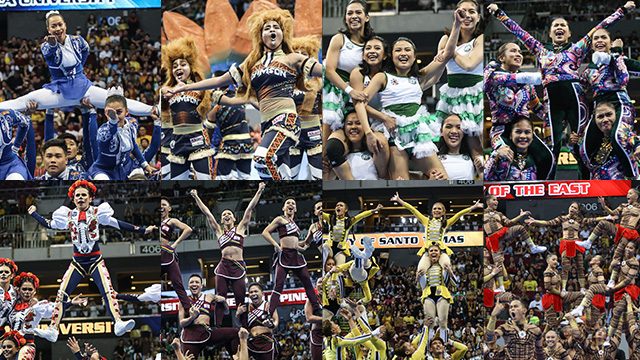 As always, prepare to be amazed as 8 collegiate teams go all out in the UAAP Season 82 Cheerdance Competition on Sunday, November 17, 2 pm at the Mall of Asia Arena.

This season, the defending champions got lucky with the draw as they landed the prime performance spot. (LOOK: UAAP Season 82 Cheerdance order of performance)

JUST IN. Check out the official order of performance for the #UAAPSeason82 Cheerdance Competition on November 17 at the Mall of Asia Arena! #UAAPCDC2019 https://t.co/MxorAGq0MU pic.twitter.com/hg5gg6wEL5

Just like in previous years, teams released their own hashtags days before the competition to hint their routine themes and for the fans to show their support on social media.

Here is a list of hashtags to use for the cheerdance competition this year: Feel the hype yet? Volumes up and get ready to cheer loud and proud as we show our school spirit in this year’s UAAP Cheerdance Competition:

The UP Varsity Pep Squad finally released this year’s how-to-cheer video through their official page!

You may use the lyrics below as a guide.

The traditional CDC send-off and pep rally happens tonight, 07:00pm, at the UP Gym! Bring your UP ID/Form 5.#UPFIGHT pic.twitter.com/Wm6Nl0NeKg

Tigers! Get ready to stand as #OneFORESTpaña as the UST Salinggawi Dance Troupe and the UST Yellow Jackets teach us the cheer for this year’s #UAAPCheerTutorial2019!

Catch them live on November 17, 2019 at the Mall of Asia Arena as they own the stage at the #UAAPCDC2019! pic.twitter.com/ypqNhymuuC