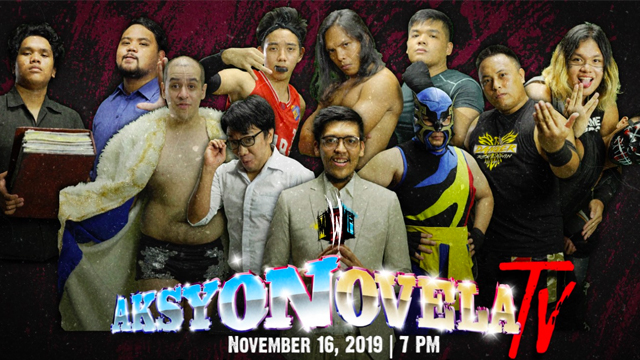 MANILA, Philippines – Did you miss weekly Pinoy wrestling shows, like how it was done in the late 80s?

The Manila Wrestling Federation (MWF) is bringing back that spirit, as it holds its first shoots with a live audience for its online show, “Aksyonovela TV,” airing Wednesdays at 7 pm on their official YouTube channel.

MWF will tape 4 new episodes featuring its very own wrestlers, as well as visiting wrestlers from Singapore and Australia, at the Barangay Apolonio Samson Basketball Court in Balintawak, Quezon City, on Saturday, November 16, starting 7 pm.

MWF plans to air the first episode from these tapings on November 27.

Veronica Litton, MWF Head of Creatives, said their wrestling promotion will be producing “original content each and every week, showcasing MWF’s Storytellers and our unique, emotionally-charged brand of professional wrestling.”

“This is essentially what Pinoy wrestling fans have been wanting for almost 20 years: a readily available weekly wrestling product that brings together the best wrestlers in the Philippines and the best in Asia and beyond,” she added.

Among the stories playing out in these upcoming “Aksyonovela TV” episodes are:

(See the full match cards for all 4 episodes here.)

“Aksyonovela TV” first aired on October 23, but has so far only featured outstanding matches and moments from past MWF shows. – Rappler.com

Want to be part of the live audience in the November 16 tapings? Tickets cost P250, with only 150 tickets available. MWF will provide a free shuttle service from the Vinzons Hall in University of the Philippines Diliman to the venue at 5 pm and at 6 pm.