Nov 16, 2019 3:12 PM PHT
Rappler.com
Facebook Twitter Copy URL
Copied
LeBron James delivers an impressive performance across the board, while Anthony Davis comes up with the game-sealing block for the streaking Lakers 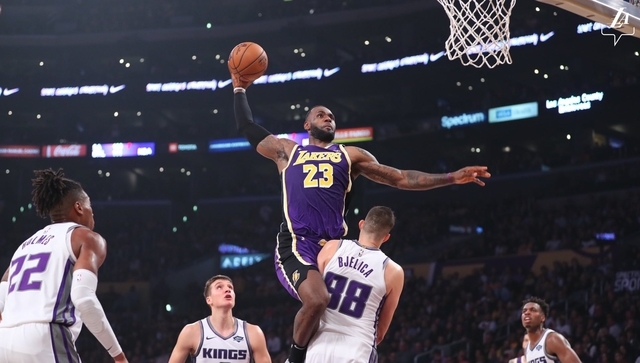 MANILA, Philippines – The Los Angeles Lakers tightened their grip on the top spot in the Western Conference with a 99-97 win over the Sacramento Kings on Friday, November 15 (Saturday, November 16, Philippine time).

LeBron James starred with 29 points, 11 assists, 4 rebounds, and 3 steals, while Anthony Davis came up with the game-sealing block as the Lakers won their third straight game to hike their record to 10-2.

The Lakers are ahead by one game in the West over second-running Houston Rockets, who tote a 9-3 card.

With 5.5 ticks left, the Kings had enough time to force overtime but Davis, who finished with 17 points, 5 rebounds, and 4 blocks, swatted away a layup from Harrison Barnes to clinch the win for the Lakers.

Kentavious Caldwell-Pope, ribbed by Lakers fans for his miscues throughout the young season, produced a season-high 16 points in the win, while Kyle Kuzma and Alex Caruso added 13 and 10 points, respectively.

Buddy Hield paced the Kings, who slipped to 12th place in the West with a 4-7 record, with 21 points and 8 rebounds as Bogdan Bogdanovic chalked up 18 points, 5 assists, and 2 steals.

Richaun Holmes had 17 points and 8 rebounds, while Nemanja Bjelica produced 11 points, 4 rebounds, and 2 steals in the loss that saw him get posterized by James in the first half.